Last Friday morning I packed up my cameras, a laptop, a suitcase, and one male Galgo Español into the Escape. Leaving the Express, (not to mention Margaret, four dogs and a cat), in Boswell, Oklahoma, I headed West. My destination: The ASFA Region 3 Invitational in Stanley, NM.

It's been a long, long time since I've made a 650 mile road trip in a car. I've forgotten how hard it is, which is to say I re-learned to respect those of you who travel great distances to events every week, or even every other month.

I had to get used to using public restrooms! And filling the tank at the auto pumps at the Flying J's instead of the RV lanes. (There was good news at the pumps, however. Flying J in Wichita Falls, TX: $1.93/gal for unleaded- $1.85 with my frequent fueler discount!). Not traveling with all of our possessions meant I had to constantly worry that I hadn't left anything important behind. In fact, I did. We didn't load our dwindling inventory of "I'd Rather Be Coursing" bumper stickers. A minor inconvenience, I guess, in the grand scheme of things. Would have been worse to forget the camera, or memory cards.

I arrived exhausted, about 10 hours later. The last 250 miles, or so, being much faster than the first 400, as I finally got on the Interstate in Amarillo. I hate slowing down for all the little burghs in Texas. Other states have found a cure for this: they're called bypasses.

My hosts, Steve and Joan Garth, (whom you may remember from our Summer trip to California), were waiting with wine, and a comfort-food dinner. I tried to keep up with the conversation and be sociable, while I attempted to shake off the sensation 2 hours after I parked in their driveway, that I was still sitting in a speeding vehicle. At 7:30 I said I needed to put my head on a pillow for a minute. My minute ended when I got up the next morning to go to the trials.

What a great location for a lure coursing trial. I'll have pictures in a coming post. Not big trial... most of them in the West are smaller than what we normally see in the East, but the people are friendly, the dogs run as well as they do everywhere, and the lunches were good. Not to spoil the suspense, but a trial here leaves one hard pressed to separate reality from fantasy. As you'll see.
Saturday night, a large group had dinner at The Buford Steak House in Moriarty, NM. My filet was good, but I think many in attendance would have been more impressed had they not been out of many of the things they would have wanted: Merlot, Cobblers of any kind, certain side dishes, etc. Kind of inexcusable for early on a Saturday night. But like I said.. the meat was as advertised.
Sunday was the Regional Invitational trial. A little different from what we're used to, as Saturdays are the normal day in other ASFA regions. But their reasoning goes back to the small trial thing. Having a regular all-breed trial on Saturday gives dogs who don't get out much a chance to get the point they need to run in the Regional.
I should mention the weather. Fabulous. Saturday was sunny and 70's, and very, very dry. Sunday started the same, with some clouds coming in around lunchtime, followed by an increase in wind, and finally, as the trial was ending, a precipitous drop in temperature. We got out of there just in time. Many of the Coloradans left in somewhat of a panic as there was bad weather threatening the Raton Pass between New Mexico and Colorado.
It was raining Sunday night as I went to bed, but rain was forecast for Monday. "light showers... 30%" is what the Weather Channel said. No problem. I'd brought my rain gear. Sandia and I were going to chase some Jackrabbits today, along with a couple of his litter mates, so it was rather disappointing to look out the window this morning and see.... white. Blowing... white. Whiskey.. Tango... Foxtrot? As the locals are fond of saying to visitors in times like this: "Welcome to the East Mountains". 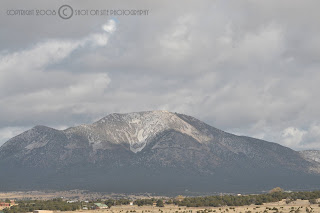 The snow wasn't going to stay on the ground for very long, but the wind wasn't going to let up either, and that effectively scotched our planned hunt. Dogs can get disoriented and lost when running in the desert in high winds. The forecast for tomorrow looks much improved, so we're going to hit the desert before I head back East to Oklahoma. I owe Sandia that much for being cooped up in the car, and in a house full of strange dogs and people all weekend.
Besides, we need to get back and keep Margaret in line. When I called her this morning, she was in Paris!!!
...
...
...
Texas. ;)
at November 10, 2008

Brother, can you spare a dime? If you find this blog entertaining, or even useful, Click on the "Donate" button and clean out that spare change that's hanging out in your PayPal account! A dime? A quarter? Fifty cents? We appreciate it!
Join us!