I know, it's a movie opening soon.  This has nothing to do with that, but will attract traffic to the blog from Google searches for the movie.

This is actually about Sandia.  We went out hunting today, as we do a couple of times a week.  This was a particularly rewarding day, with 4 long courses, culminating in a take on the mile+ fourth chase.  And as always, I took lots of pictures.  Many of them were pretty good, but it was a detail I noticed on one that caught my attention.

That's Sandia.  Looking scary.  And he looks so skinny when he's standing still!  Looking at it, I was reminded of something else: 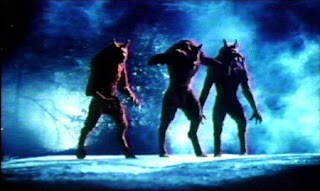 Yeah.  That's what I thought.
Posted by Daniel Gauss at 9:19 PM No comments:

It was quite the color palette of girl dogs that hit the far reaches of the local public land yesterday.  All girls, because Dutch's girls are in season.  I joked we should have let Margaret and Cherie bring them out and we could just wait for them at Campos'.
There was the blue girl Ashley, the red girl Cinnamon, the red and white girl Phyllis, and the new star (we hope) Willow; in the yellow blanket.  This was, according to those who should know best, the first jackrabbit  she chased.  Fortuitously, it popped up right in front of us as I walked her on a slip.  She took off after it with great enthusiasm!
Then reality hit, as she fell behind the other dogs, and brought up the rear as they circled, and caught the jack a little over a minute later.  See, she's been in shelters, and foster homes, and on lead at our house for well over 2 months.  She's not even close to being in the shape the other dogs are in.  What she needs is time.  She may be competitive by the end of he cold weather season, (and I'll have to watch her more closely than the other dogs when it starts to warm up), but more likely it will be next Fall and Winter that she'll begin to really shine.  She's built for speed, and eventually I'm sure she'll show it.   Meanwhile...

Think this would ever happen before the advent of the internet?


I received a phone call this morning.  Early.  As in, I had just gotten up and let the dogs out.  It was from a very nice gentleman in a place called Porcupine, South Dakota.  Being fairly geographically-competent, I kinda knew where this conversation was going.

It seems, this man does some coyote hunting every year around Thanksgiving near Casper, Wyoming.  This past Thanksgiving, his favorite dog.. a black and white 3/4 coyote hound x 1/4 Scottish Deerhound named "Willow", escaped from her truck box, and was last seen chasing Pronghorn.  Though they stayed in the area for 3 days looking for her, even going back at night time with spotlights, she was gone.  They made the assumption that she was dead.. either run to death by the Pronghorn, or a collision with an embankment or some other immovable object.


The scene now shifts to somewhat later.  Early in December, a stray, fitting the same description is picked up by Casper Animal Control, and at some point is adopted out under the name "Bella".  Apparently the person adopting this dog expected some drooling, happy, jump-in-your-lap-and-lick-your-face black lab-type dog.  After 6 days, she was returned to the Casper shelter.


I don't know the details of how the rest of this tale gets to the present, but I can probably construct a plausible scenario.  After a certain amount of time, with no more potential adopters, "Bella" was scheduled for euthanasia.  Which is where, apparently, Black Dog Animal Rescue, being a "no kill" shelter, comes into the picture.. , and therefore, where Margaret and I come into the picture, as recorded in the previous post.


So, back to the phone call.  The gentleman from Porcupine wasn't trying to get his dog back, as I initially feared. He "thought (I'd) like to know something about (my) new dog."  And this is her story:  She comes from some very accomplished coyote hunting stock.   Her father is a large, black coyote hound named "Tippy".  Why "Tippy"?  I'm not sure, but it might be because he has three legs, and despite this handicap, was still capable of chasing and killing coyotes.  Her mother, "Sting", is half Deerhound, half coyote hound.  Willow was his favorite dog, and he just wanted me to know he was happy that she ended up in a good home.  So just as we will with the Black Dog people, we'll be touching base periodically with this Mr Vaughn in South Dakota.  (it's kinda like your adopted kid being able to finally find his birth parents)..  I think we're going to go back to the name, Willow.  She seems to respond to it, and it's easier to call loudly.


We've been exceptionally lucky with all of the dogs who have come into our lives from varied and sundry sources.  Randir, the deerhound who outlived all his mates and contemporaries, Buffy the Vampire Slayer, who had an unofficial national fan club, and her sister, Fanny.  We're still learning about the talents, practical and comedic, of little Miss Ashley.  Even Rally the broken, epeliptic coldblood greyhound had her moments  I see no reason for our luck to change now  Timing, it seems, really is everything.
Posted by Daniel Gauss at 11:30 AM 4 comments: 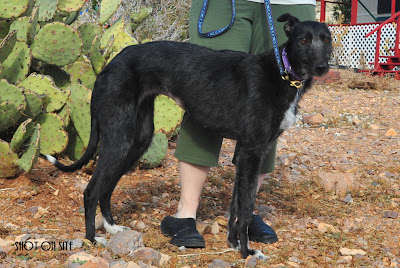 These things seem to come out of the blue.  Last month we were a 4-dog household, but with only one dog young enough or sound enough to run competitively.  Apparently Dutch got tired of hearing me bitch about it, and offered us Ashley, who has fit in perfectly here.  Not only does she hunt expertly in tandem with Sandia, but her vocalizations are a source of constant hilarity around the house.

Last weekend, someone posted on the Deerhound discussion list about a "Deerhound" in a shelter in Cheyenne, WY.  Sometimes I follow these links to see what's out there.  This was one of those times.  Obviously, not 100% deerhound, but there's parts that are.  Most likely greyhound x deerhound, but whether 50/50 or some other ratio will forever be unknown.

Regardless, after looking at the pictures, I think I was hooked.  Sent the link to Margaret's computer and she was also hooked.  There was only one thing to do, and I did it.  I emailed the shelter, said I was interested, and asked about the adoption procedure. I already knew someone would be coming to New Mexico from Wyoming, and would be passing through Cheyenne, and was pretty sure I could get her here without having to drive all the way up there.

I got a nice email from the director of  Black Dog Animal Rescue.  She spelled out the routine, and mentioned they usually do a home visit, but because of the distance, she would accept 3 references and our veterinarian. No problem. As you probably know, I could come up with a hundred references, and 2 dozen veterinarians if I needed to.  People all around the country know our dogs live the life of Reilly, or if not Reilly, at least Snoopy.

Then the oddness happened.  While I was lining up my five references, I got another email from the shelter director.  It began, "I've looked at your blog....".  Uh Oh, I thought.  You know what's on this blog.  Dogs chasing jackrabbits.  Dead jackrabbits. Liberal politics.  I'm in trouble.

No such thing, as it turned out.  She decided, after reading the blog, that Margaret and I would be the perfect home for Nessie!  This was definitely not a California shelter!

So, in less than a week, we got the paperwork done, we got the contract sent out, we coordinated with Heather Minnich, who would be doing the delivery as far as Socorro, and last night we made the exchange at the Socorro Motel 6.  We were home by 10:15,  where I attempted a photo with my phone for Facebook.  Not easily done in a dimly lit room and a black dog.  The photos, which you see here, were taken in the bright sunlight.  They'll get more artistic when she becomes more comfortable and we can let her off lead.

Of course, all the dogs gathered around when we arrived, and of course they all sniffed a bit, and accepted her.  All but one, that is.  The resident male.  The legend in his own mind, Sandia who still hasn't stopped barking every time he sees her, and does his best to make sure she knows he's the boss of the pack.  What a jerk.  He did this with Ashley, too, and he'll eventually get over it.  Especially if she works with him in the field as well as Ashley does.  Dutch's Pack Hunt is coming up, after all. 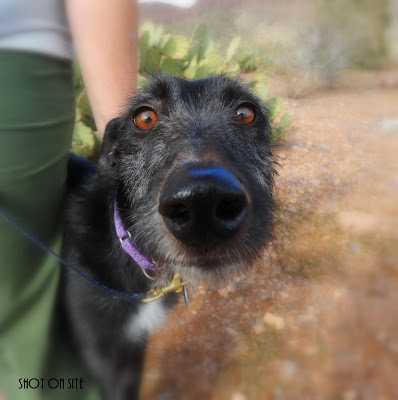 Now there's irrefutable proof there's a Scottish Deerhound in there.  Only dog on the planet with a nose like that! 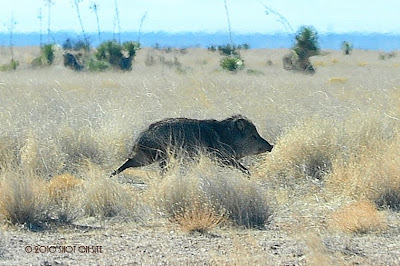 When you take your dogs out into the field, you just never know what you're going to see.  Some (most!) days it's Golden Eagles, or rattlesnakes, or tarantulas, or coyotes.  Gila Monsters have even been seen locally, although happily, not by me.  The list (in the Desert Southwest at any rate) seems endless.  So, it was really no surprise to see this solitary Javelina crossing the road as I pulled out of some ranch land after running Sandia and Ashley.  What is surprising, is that their paths (fortunately) did not cross while they were all out and loose in the same plot of land!

Posted by Daniel Gauss at 7:01 PM No comments:

I did something different this weekend.  There was a hunt locally, and I left the dogs at home, opting instead to carry about ten pounds of photographic equipment around the desert instead.  The results were, modestly speaking, fantastic. 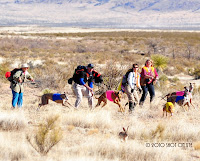 Usually when I shoot, either at a hunt, or just out free coursing with friends, I'm with the gallery, and all the shots look the same.  You get a jackrabbit butt, and you get hound butts, as they disappear  into the distance.  This time, I got some separation from the group, and either hung out with the judge, or got off by myself, sometimes getting shots from the side, like this attached slideshow of the Saturday Greyhound final, or way out in front as I did for this second run from Sunday's preliminary Greyhound run.

In the slideshow above, I think I captured the feel of one of the best courses I think I've ever witnessed.  All three hounds in the chase took at least one shot at one of the most badassed jackrabbits I've ever seen. He even slipped away from a near fatal tactical error, where he turned left to avoid one dog not realizing the other two were waiting about 6 feet further left.  He finally created enough space to scamper over the hill and get into the rougher

vegetation, and made his escape.

It was pretty obvious he'd experienced the hot breath of other predators in his brief life as a prey animal, and used all of his tricks.  Hats off to you, Mr. Hare!

Posted by Daniel Gauss at 1:36 PM No comments: 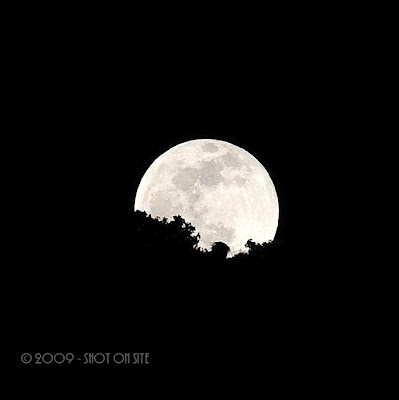 For the benefit of that one reader of this blog who's not on Facebook, here's a shot of last night's final "blue moon" of the decade.  (Unless you believe the decade doesn't end until the end of this year- but that's a whole 'nother article).

Bonus: who can tell me the difference between this moon rising over the North Florida Mountains, and a similar shot from last Spring?

Posted by Daniel Gauss at 3:26 PM No comments: