BODE MILLER MISSES GATE IN SLALOM, VEERS OFFCOURSE, SHOT IN THIGH AT BIATHLON VENUE.
BAL DROPS TO .280 DURING HOSPITAL CONFINEMENT
Says Bode: "It's awesome, man... I got to party and get shot on an Olympic level!" 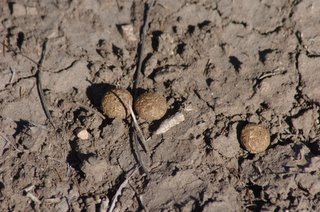 What the hell is that all about? Left Behind cultists predicting the EndTimes? Preparing for the Rapture? What are they talking about, these wandering voices in the desert? Nothing so monumental as that. They're talking about the body waste from Lepus Californicus. Jackrabbit crap. But to hear the hunters as they slowly walk the desert hoping to flush a hare, you'd think they were discussing the Communion Wafer Body of Christ 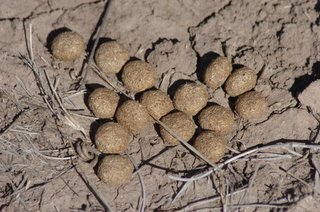 The CW is, that when you see jackrabbit sign, you will soon see a jackrabbit! What it really means is: Absolutely Nothing.


In my short hunting career, if I've learned anything, it's that these critters shit way out of proportion to their numbers. One jackrabbit can litter acres of desert, I swear it's true. If it weren't true then we actually would jump a jackrabbit when we see fresh sign. It seldom happens. Oh, that it were true. 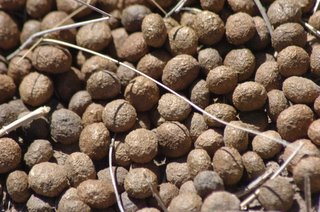 But like any creature of habit, we'll be out there again next Winter, talking about sign. And I'll be as guilty as the next guy.
at February 23, 2006 No comments: