Sagan Would Be Shocked. 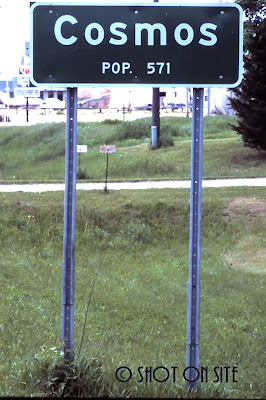 I had heard it was BILL-ions and BILL-ions of times bigger than that.

Going to Palomas, Mexico on Wednesday for a couple of reasons.  I have a dental appointment.  I'm also going to get some new glasses, and I'm going to be looking for something similar to what I wore in the 60's while in the Navy.

The image on the right shows the same horn rimmed glasses I wore in high school, and for the first couple of years in the Navy.

While serving at the Naval Hospital in Philadelphia and attending Neuropsychiatric Technician School, most of us opted for the gold, wire-rimmed "Hippie" glasses.  That's the image on the left.  Your guess is as good as mine, all these years later, as to why I have these two images in my collection.  What was I thinking?

Anyway, both of these styles are still available in some form or another.  I don't know which one to pick.  There will be no difference in price.  FWIW, Margaret says the wires in the picture are "too big" - whatever that means.  Also, for those who know me, my scalp is kept very close cropped these days.  Also, maybe I'm not quite as svelte as in these pictures.

So help me out.. I don't promise to listen to you, but which way would you go?  Gold or Black? Here's a poll:

Oh yeah.  Third reason I'm going to Mexico: Need to pick up a litre of Gran Centenario Reposado.
at March 29, 2011 No comments: 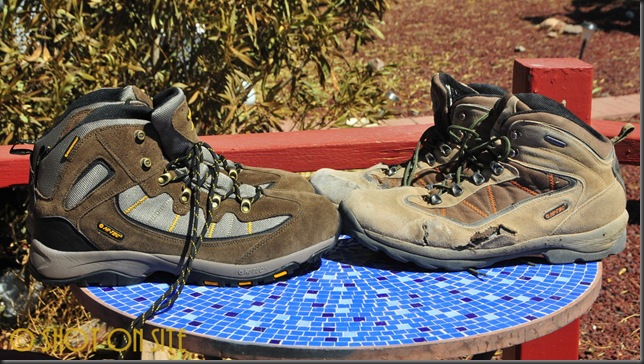 My new boots arrived the other day, and not a moment too soon.  The old boots  (on right, as if I had to tell you), lived a long and productive life.  In this environment, three years is a long life.  The rocks and boulders in the nearby mountains that I hike are responsible for most of the gaping holes you can see.  It’s time to retire them.

Speaking of lightweight.. I spent more on this pair of boots than on their predecessors… and their predecessor’s predecessors.  $85.00.  That’s amost twice as much, but the obvious trade-off is the weight.  The old boots weigh 3.5 pounds.  The new ones are a full pound lighter, and it was instantly noticeable this morning while out hunting with the dogs.

They’re also “waterproof”, which is probably meaningless where we live, because it’s obvious that it’s never going to rain here again.

So.. that’s my unsolicited testimonial.  If you’ve never worn Hi-Tec boots, you should give them a try.
at March 27, 2011 No comments:

...millions of athletically-challenged iPhone owners flinging their iPhones over the back yard fence, and their iPads into the lake..
at March 26, 2011 No comments:

and to think there have been times when we've walked for hours and never got a sniff..

H/T Jim Heffelfinger via Dutch Salmon
at March 25, 2011 No comments:

Everybody and their brother (and aunts, uncles, and nieces and grandsons, no doubt) took pictures of the closest "Perigee Moon" in almost 20 years. Why should I be an exception?

Now, every time I've shot the moon since we've lived here, it's been from the back porch, and I've caught it rising over the Little Florida Mountains which, you should know by now, are basically in our back yard.

I needed to find a new location to shoot from in this case, because I knew that once the moon got a few degrees above the horizon it would begin to look like any full moon. I needed the horizon in the picture when the moon was appearing to be at its largest. It was time to pack the little Montero and head up into the Little Floridas.

We were going to a spot about 2 miles east of the house, but the drive was more like 6 miles on fairly easy jeep trails. Our vantage point would give us unobstructed view all the way to the Organ Mountains east of Las Cruces... nearly 100 miles away! I had my horizon, and had only to wait for the moon to rise.

Problem was, I had no way of knowing exactly where the moon would appear. So we arranged it so we'd be there early. Real early. Not wanting to be rushing around at the last minute, we arrived at our lookout around 6:15. Moonrise was scheduled for 7:44!

I got the camera, with 300mm lens on the tripod, and wandered around with another camera and shot a bunch of pretty much forgettable ambience shots. I've been to this location many times before.

I took my position at the tailgate when there were about 20 minutes remaining before moonrise. Margaret thought my verbal countdown ever five minutes was overkill, but hey, that's how I roll. When I finally saw the glow on the still quite light horizon, I had only about 10 seconds to get focused in and start shooting. It moves fast, and yes, it really did look 30% larger than a normal moonrise:


For a while.. meaning 2 or 3 minutes.. I was able to shoot on auto, and still get detail in the foreground, and also in the moon itself, along with its beautiful orange cast. Also, the whispy clouds add much to the drama of the image. Unfortunately, as anyone who has tried to capture images of the full moon knows, (and judging from the interwebz, that's nearly everyone) there comes a point when you have to choose between detail on the ground and detail in the moon. You can't have both. Again, as evidenced by the images on the internet, most of the people who shoot the moon, have no idea how to do it properly. If you let the camera have its way, you end up with a white disk in the middle of the frame that looks very much like an Alka-Seltzer tablet.


If you want a properly exposed moon, with lots of detail, you expose exactly as you would at high noon, because what is moonlight, after all, but reflected sunlight! At ISO 200, shoot it at f5.6 and 1/500th of a second. Or thereabouts. Just don't be looking for any details in the surrounding frame. To get that you have to "take one from column A, and one from column b", mix in a little Photoshop magic, and voilá...

That image was taken from the old stand-by location.. the rear porch of the house.  After we'd used up almost all of the daylight up on the mountain, we drove back down as quickly as was prudent, and got set up on the porch in time to catch a second "rising".  Moonbats.
at March 22, 2011 No comments: 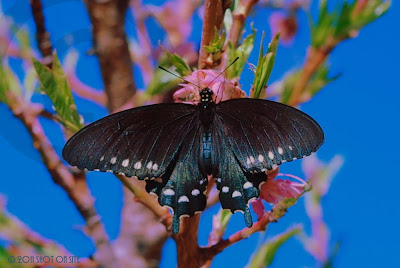 The peach tree is attracting all kinds of insect life, from common houseflies, the metallic green sweat bees featured in yesterday's post, regular honeybees, and this solitary Pipevine Swallowtail Butterfly. I don't know where his friends are, but he's now thoroughly worked over the tree for the last 3 days. 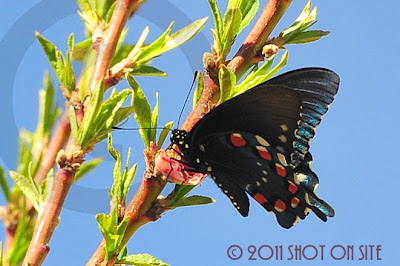 Email ThisBlogThis!Share to TwitterShare to FacebookShare to Pinterest
Labels: Around the yard, Follow up, Images, Nature, Wildlife; 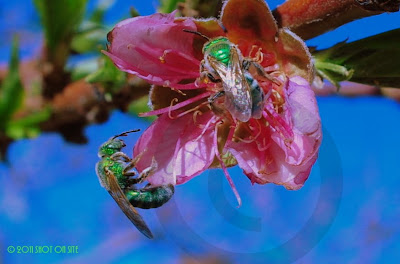 Email ThisBlogThis!Share to TwitterShare to FacebookShare to Pinterest
Labels: Around the yard, Images, Nature, Wildlife;

Some Good News After All.

As reported previously, the palms are DOA, as is the fig, and much of the cacti, and presumably the oleander. Noticed yesterday that even the large Mexican Elder is brittle, and may be dead as well. All victims of either/or the brutal February cold snap and drought. But I've been watering the pines (now that all of our piping's been repaired) and I'm happy to report they're no longer golden in color, but are now more of a rusty red with a lot of pale green starting to show through! Best of all, as illustrated by the photo above, the peach tree has survived, and is blossoming. Some of the readers of this blog may have tasted the peaches from this tree last Summer, so you know this is very, very good news. I'm betting the little pecan is probably all right as well.
at March 10, 2011 No comments:

Everything but the Paper Cut: Eye-popping Ways Artists Use Paper | Fast Company - StumbleUpon

Having recently discovered StumbleUpon, I find that it is yet another exquisite time waster.  The above piece on ways contemporary artists are re-imagining paper is a great example.

This blog, and it's "sister" blog, Scanners! are both registered with StumbleUpon.  You can help create traffic when you click on the StumbleUpon logo. It's found on this blog on the right hand side in the subscription area, and on the Scanners! blog at the upper left side).  Increased traffic means potentially increased ad revenues.  Maybe.  Hey, it's worth a try!

UPDATE: As I continued my morning "Stumble", I discovered yet more amazing paper art.  To apply the term "painstaking" to this work doesn't even begin to cover it.
at March 07, 2011 No comments: