We've been considering vanity plates for the Bounder, and the Escape for some time now. It's especially important, now that we're offering the "Dog Tags" shirt design. We've settled on

XLCRATE
for the Bounder. We thought we'd have a poll to help us out with the car. (This will also help us find out if anybody's reading this damned thing). Here are our finalists:
JACKDOG
LNGDOGS
LONGDOG
DOGBOY
STAGHND
DZINRK9
K9IMAGE
HUNDPIX
We'll also take suggestions, (we can't think of everything, after all!). Leave your votes and comments.
at July 29, 2005 5 comments: 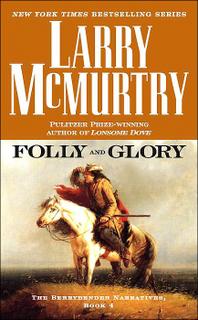 I just finished Folly and Glory, the fourth, and final, book of Larry McMurtry's Berrybender Narratives. The others being, The Sin Killer, The Wandering Hill, and By Sorrow's River. If McMurtry isn't America's best writer, he's at least one of the top five or six.

The series follows Lord Berrybender, and his family's trek into America's 19th Century wild West. The characters are a mixture of fiction, and real heroes of the times, like Kit Carson. Along the way, they encounter Indians, Slavers, Mexicans, other travelling foreigners, both famous and unknown, Bison, trappers, traders. Starting and ending at St. Louis, the trek covers the whole of the West from Yellowstone, to Santa Fe, to Austin.

It's not a series for people who like to get comfortable with a character, because like the real times, death follows the Berrybenders and their extended entourage on their four year, four book trek. I was disappointed, for instance, that their staghound was killed by Indians very early on in the first book! 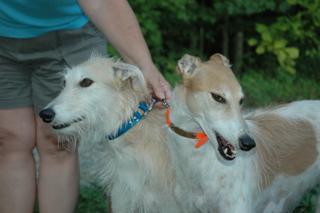 I was taking head shots of Fanny and Buffy, so Mary Jane Helder could do a watercolor... and the picture above, just reminded me of something, but I couldn't quite put my finger in, er, on it....... 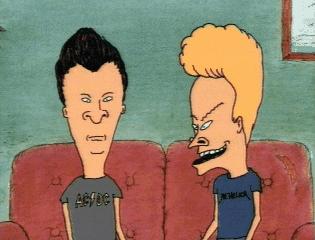 How It Got Its Name..

It suddenly struck me: Why Hare-Brained Express? The idea came from many photo images I've taken of our hounds in pursuit of the Corralitos version of the Black Tailed Jackrabbit- a formidable foe- capable of amazing speed and agility in avoiding being caught. In fact, until last Winter, my hounds have never caught one- and they've never caught one without help from another dog... usually a Saluki! Anyway, here is the image we chose to put on the rear window of the Bounder... That's the World Famous Buffy the Vampire Slayer, in a single-minded, "hare-brained" pursuit. This, of all the shots I've taken- even the later ones of Rally's intensity of purpose, best illustrates the name. From a format standpoint, it's also the one that best fit the window. LOL.
at July 26, 2005 1 comment: 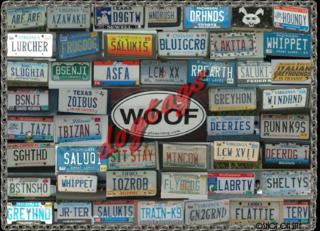 Introducing Dog Tags: the T-Shirt
Here it is... the latest innovative design from the fertile minds of Dan & Margaret. The cool part about this is that it will be constantly evolving, as my collection of "dog tags" grows and grows, meaning that the shirts will be true limited editions. My shirt is a plum color... very close to the color of the font, above. It looks great. It also looks great on Black. Click on the image to see the full size!

Leave comments and feedback. We'll be sitting tight here in Jackson, MI until the camera comes back.

I'm getting Behinder and Behinder!! 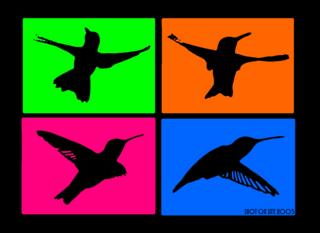 I can't believe I haven't posted since April! Well, most of the events of the previous posting have come and gone. The Irish Wolfhound specialty was fun, especially watching the big'uns doing agility. I was impressed. The II was hot, humid, exhausting, and, as always, impressive.

This past weekend, we went to Canada to shoot the Ultimate Canine event. Obedience, Rally, Shows, Lure Coursing, and Racing- both straight and oval. We entered Rally in the oval meet- her first official event as a greyhound. And damned if she didn't go undefeated and win the damn thing!

The picture above is one of Margaret's new "artsy" designs for tee-shirts, tote bags, and such. We'll be seeing how much interest is out there over the next month, as we take them to a couple of craft shows in Michigan and Wisconsin. We'll put a selection up on the website, so you can see what we've been doing lately.

We're on a kind of "forced bivuac", as the Nikon D2H... the workhorse of my business, went to hell last weekend, and is now being "rejuvinated" by the Nikon service techs on Long Island. $400+ bucks, they tell me. Hey you out there- Buy some shirts!

I've got a cool new shirt design, that all you dog folk are going to love! I'll post it tomorrow!
at July 22, 2005 No comments: