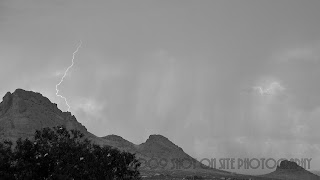 ...I'm generally a bit slower than lightning. But with patience, and the ability with digital photography to delete a couple hundred images that have no lightning.. you can get something like this. I'm adding a few more to the "Around the yard" slide show as well. This little thunder-boomer worked it's way through Deming this afternoon and, as you can see, laid down a lot of water... down there. Once again, it barely sprinkled here at the Homestead. 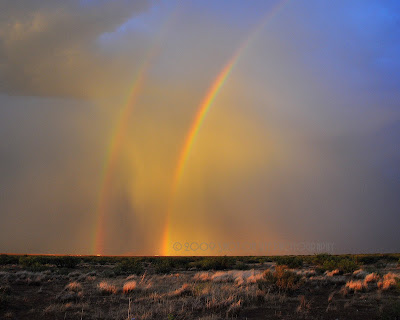 Before I get to a rather long rant on bugs- well, flies mostly- I have to share this with you. Most intense meteorological phenomenon I've seen in a very, very long time. Maybe ever. Driving back home from Silver City.

We always wondered why every property in our "neighborhood", without exception, was either fenced or walled, and gated. Mystery solved. All of the "Deming Ranchettes" are open rangeland.
at July 26, 2009 1 comment:

Before we start to get serious here again, it's time to promote some exciting new "religious themed"* goodies, available from our Cafe Press storefront. You can get there by clicking through the display ad at the top of the page. In addition to the "Family that preys..." sticker shown, (and I would be remiss if I didn't give a hat tip and shout out to Cindy Sisson who suggested it), we also have the new "Prey! at the Church of the Open Field" sticker.
Currently only bumper stickers are available, but the usual clothing and coffee receptacle items will be there shortly. We are also stocking these ourselves, if you'd rather deal with us. Just shoot us an email.
We now return you to our regularly scheduled photos of more weird fauna and flora from the high desert. Stay tuned.
*surely you know me better than that.
at July 25, 2009 5 comments: 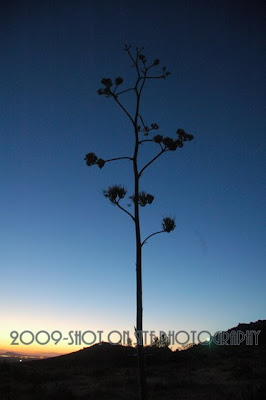 It doesn't end. Even in the weeks' long temps in the upper 90's. Today, or this evening to be more precise, the blooms on one of our two New Mexico Agave decided to open. At least, a couple of them have now, which means food is available for the local critters. I was worried about the hummingbirds. I saw one inspecting a red clothespin the other day. There hasn't been a lot of blooming going on lately.
But the feeders around the agave this evening (and you can see their shapes in the photo above) are often mistaken for hummingbirds. In fact, they are Pink Spotted Hawk Moth, and they seem to think the nectar in this century plant, (which will die, now that it's bloomed) is pretty darned tasty. The hawk moth, along with the hummingbird, and some species of bats, are the only animals to have perfected hovering flight. (I learned that on Wikipedia!). 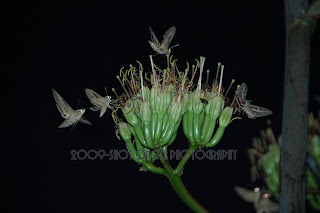 One amazing thing about this plant, is that center "stalk"... when we left on our 7 week road trip, it wasn't there! It shot up to its current height, which I'd estimate at 18-20 feet in just 50 days. And when it dies, it will do so suddenly, just falling over. Unfortunately the two agaves sit next to where the motor home is parked. Timber-r-r-r!
at July 11, 2009 1 comment: 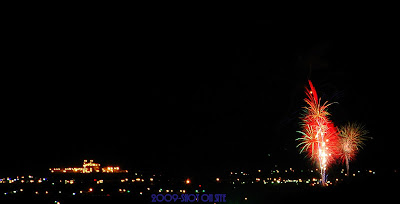 Spent most of the day being.... what? Independent, I guess. Late this afternoon we went in to the St. Clair Winery, to get refills in our half-gallon "bulk wine" jugs. (One dry white, one dry red). Enjoyed the "jazz" trio playing on the veranda for the "Festival of the Grape" (or whatever they called it), then came home to watch the town's fireworks display from our front porch, several hundred feet above launch site. Next year, I think we'll go in to town to watch.. it was a little bit too far, as this un-cropped image will show.. 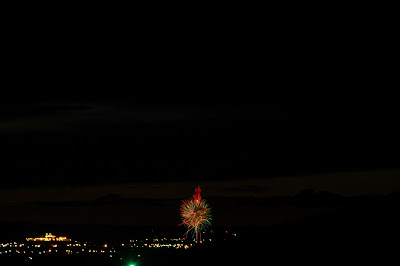 ...I like to be a bit closer than 8 miles, or however far away this is. I've loaded several more (cropped) fireworks images to the slide show on the sidebar.
Speaking of the slide show, I meant to mention it earlier, as it's all new. Since it's Summer now, I thought it was time to get rid of the Winter mountain shots that have been running there since around February. All but a handful of the images in the new show were taken from the porch, or the yard. Sweet.
I may as well mention something else new on the blog, although you'd have to be blind not to have noticed it- the new Cafe Press app from Sellit. I want to point out the "Share" button on the lower left corner. Press it, and see the many ways you can help old Shot On Site make a few extra bucks in his retirement. Go ahead. You want to.
Also helpful... especially for someone I know who is looking to score some fresh green chiles... is an ad I noticed up under the blog description.. someone is selling Hatch Green Chiles. Blog rules forbid me from suggesting what you do, but I think you know.
at July 04, 2009 No comments: 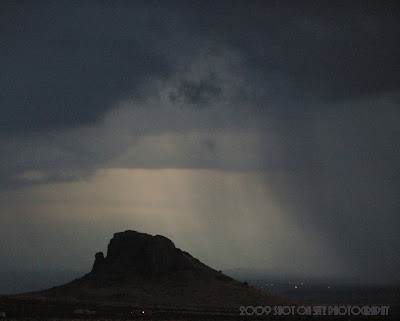 For the past several weeks, with the exception of an occasional overnight passing shower, we've missed out on the so-called "monsoon" rains. We've been able to see it. See it often, in fact. Usually as in the form above, as heavy downpours just a tantalizing couple of miles away on the Deming Plain.
Well folks, just moments after this picture was taken, this storm, complete with lots of sky to ground lightning, thunder, and flash flood alerts, washed over the Hare-Brained Homestead. We could see how the arroyos could fill up in a hurry, and even though I could see the UPS van, just a half mile away, making a delivery at Rock Hound State Park, he wasn't going to deliver that last package to our little abode up here on the hill, because there was no way he'd be guaranteed that the wash at the bottom of the hill wouldn't be rushing with water. So at 8:44PM, my UPS tracking status changed from "out for delivery", to "emergency conditions beyond UPS' control". And that was that. I won't get my new tripod until Monday, and I'll have to make do with the old one to shoot the Deming fireworks tomorrow... (which we should have a fantastic view of, and which you'll see pictures of here.) Hang in there. 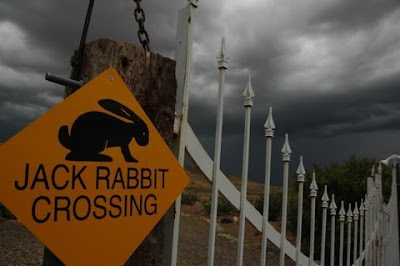