I've been coaxed out of retirement, if only briefly, and only because the drive is less than a thousand miles. And only because I'll get to see some friends I haven't seen in quite a while.
The ASFA National Greyhound Specialty will be held in Tyler, Texas on November 13, with a greyhound-only LGRA racemeet the following day. Details at the link.
The fact that you can get the finest action images of your dog... ever... should be enough to get you out to this event, but if not, I guess there're trophies and such as well. 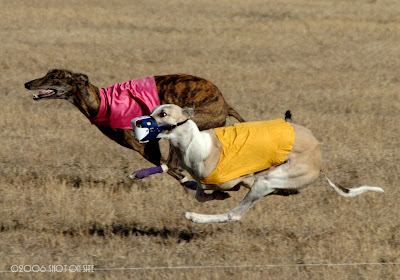 "At Least Our Percentage is Good" 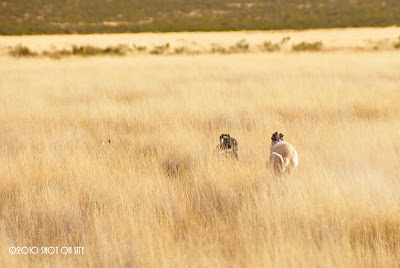 The wry comments of one M. H. Dutch Salmon, after Ashley ran down this hapless hare in the tall cover, (with a little help from Sandia, and Dutch's dogs, but it was pretty much all Ashley's hare).
Things have improved only marginally since the previous post bemoaning the lack of jackrabbits in our area.. in about 6 trips, we've run 4, caught 2 for sure, and had one hole up on Ashley and Willow. 75%. Will we still be catching them at that rate when we've run a hundred? I'd really like to find out.
Posted by Daniel Gauss at 10:00 AM No comments:

Where Have All the JRs Gone.. 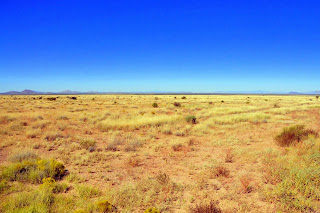 Back in the Spring, when we ended our hunting for the Summer, we had no idea what the next season would bring. The Winter and Summer had been pretty wet, at least out in the areas where we hunt, if not in our yard, (but that's a whole 'nother story). Late Summer into September gave us greenery in the desert and mountains the likes of which we haven't seen in our short time here, and now that it's finally starting to be cool enough in the mornings, and the dogs are plenty antsy, we finally hit the dirt a couple weeks ago. The green is pretty much gone now, but the cover is unbelievably high. Cows! Do your job!
Option one is always option one- the big ranch between here and the Cruces. We started off in the north end, which has always been good. Not so much this time. We walked around for almost two hours without a sign of life. And when I say "sign", I mean no sign.. not a single pellet was seen in all the time we were out there, and the field looked like it had been submerged for much of the Summer.
We decided to head to the south end, where we finally jumped... and caught, our first hare of the Fall season. We managed to jump one more, but he was able to elude the hounds in the high cover. By then it had warmed up so that it would be a little dangerous to continue hunting, and we repaired back to Deming, and our old standby- the Campos restaurant.
Between then and now, I did some scouting around for some new fields, West-Southwest of Deming, and found a possible goldmine, (pictured above). Hundreds of sections of grazing land, and all public. About 2/3 BLM and 1/3 State, with no hidden private parcels to accidently stumble upon. It's mostly flat, and the walking is easy because there's no "bunch grass". Cover is moderately high. When Dutch Salmon saw it, and we began walking it, he called it just about perfect rabbit hunting land! But there's a problem.
We've been out twice now, in two different areas and have yet to even sniff a jackrabbit!
The irritating part is, we know they're out there. We've seen them from the road when we're driving in. It's a matter of time, and I know we're being impatient, but the dogs want to run one now! I saw one this morning when we went back to Option One. Dutch called to say he was running late, so Sandia and I just wandered around near the truck when I noticed a big one trying to sneak away, which was hard because he had to leap high in the air to see where he was going (the high cover effects everything!). If Sandia was looking north, he'd have seen it. He was looking east. It stopped, with its long ears standing out above the cover, but by the time I got Sandia pointed in the proper direction, it had fled the scene. It was the only jack I'd see the rest of the day.
Posted by Daniel Gauss at 4:14 PM No comments:

Just checking to see if anyone was still hanging around here. I've been time travelling, so I'm sorry to have left you for those 5 minutes.
We may ramp this bad boy back up if there's still interest. Leave a comment! Lots has happened in that 5 minutes! You wouldn't believe!
Posted by Daniel Gauss at 10:51 PM 2 comments: