Poppies. Yeah, more poppies, but this time it's different. It's a day in the life of a clump of poppies in our yard. 10 hours reduced to a minute and twenty four seconds.. just for fun. 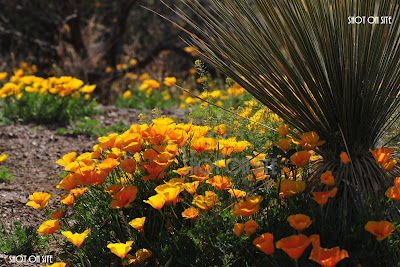 Wildflower season in the Desert Southwest is ramping up.  On Easter Sunday, we took a long drive into the hills, first to do some Geocaching Northeast of Deming.  The purpose of this was to work up an appetite for the huge buffet Albert Campos was laying out at his restaurant.  (It did not disappoint.. especially the Chicken Cordon Bleu with the surprise inside: Green Chiles).  The entire hillsides of the Goodsight mountains were yellow.. somewhat from the Mexican Poppies, but mostly the huge carpets of smaller yellow-green flowers which may or may not be mustardseed.

Following our huge dinner and desert, we needed more exercise, and drove the Mitsubishi up the power line "road" to a point about 3/4 mile from the big blankets of poppies.  Far from showing signs of fading away, new bunches of this beautiful flower are showing up every day.  Our yard is overrun!

In addition, we spotted many other flowers which are just beginning to pop up.  Most of them we've been unable to identify.  Some of them we think we've identified.  We're leaving it up to you, our loyal readers to look at the pictures in the slide show (below) and help us identify what we're seeing.  (It may be easier to click through to the album at Picasa Albums, and look at the larger versions).

A repost from 2007, (and one of my better efforts).  We had posted this picture of Bubba, and had a poll for people to guess his COO (Country of Origin):

The "Bubba Poll" is now closed. For those waiting breathlessly for the answer... It's Georgia. That's right, Georgia. And not the one over there in the old Soviet Union.. the one in the American South. Bubba is an
Appalachian Corn Hound;or rather he's descended from the Corn Hounds, which were first created in the North Georgia mountains at the turn of the last century by mountain men who needed sturdy guard animals to protect their "corn likker" stills. Borrowing heavily from the French Great Pyrenees, for size, American Pitbulls for tenacity, and an occasional greyhound for speed in pursuing the hated "Revenoors" out of the mountains, these ingenius mountain dwellers produced a hound whose only vice was a taste for fine French wines and cognacs. Alas, this was to lead to the ultimate demise of the breed, even though it guaranteed that they would stay out of the moonshine. Because of their expensive tastes, these poor hill folk were unable to afford to keep this handsome dog. Additionally, the Corn Hound was able to somehow maintain beautiful strong, white teeth throughout their lifespans, which led to poor self-esteem among the very people that created them.

The entire population was, therefore, shipped off to Texas during the Great Depression, where the somewhat-wealthy Sheep Barons were able employ them in their current capacity, as sheep guarding dogs. So that's Bubba's story.. so rare, you won't even find it in Wikipedia!