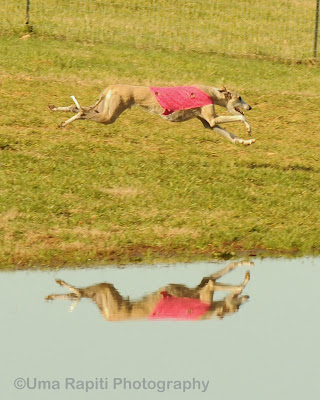 Today, Tuesday January 30, 2008, Sandia became the first Galgo Español to run officially in an American Sighthound Field Association lure coursing trial. Granted, it was only the "Singles" stake.. (hounds run by themselves, with only a ribbon as a reward), and he didn't win... but he did take the 2nd place ribbon... Out of an entry of 2. It has something to do with his propensity to stop in mid-course and want to come back. A simple shouted command to keep going gets him around the rest of the course. It wasn't always that easy, so I'll take what we get.

This image was supplied by photographer, Lee Gearhart of Uma Rapiti Photography, who plies his talents in the Southeast US. You may find more Sandia images at his website.

I'll have more on the pond in the picture in a future post. It played a big part in keeping everyone entertained this weekend.

Hare-Brained Express Tour 2008. A Look Back.

For the first time since the Express took to the road, our annual odyssey didn't begin and end in Georgia. Ended, yes, (red flag) but we started our 2008 travel in southeast Texas (green flag). Things are back in sync now, as we're not leaving Georgia until the first or second of January. I assume we'll end 2009 back with our friends in good ol' red Georgia!

This map illustrates our GPS trail for the year. What it can't show, unfortunately, are the legs that were traveled more than once. Trust me, there are quite a few. It also shows our travel leaning more and more towards the Southwest, a trend I suspect will continue, until we don't travel at all.

That California trip sticks out like a sore thumb, doesn't it?
at December 27, 2008 No comments:

Merry Christmas from the Families.

What the heck. After perusing South Park, Monty Python, and other Christmas anthems not safe for work or kids, I ended up with the same video we used last year. And it's so good, arguably the greatest non-traditional holiday tune ever, we're just going to make it an annual thing. Our "christmas card" to you!

Only In the Southwest. 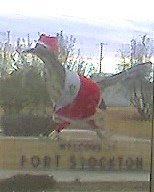 The quality's not great, but that can be explained away by the fact I shot it from the moving Express, through a dirty windshield... the curved part... with my phone! It's also heavily cropped, but was just too cool to pass up.
If it's hard to make out... it's this fellow in a Santa suit.
at December 21, 2008 No comments:

The Farkers are having fun with this one... I particularly like the comment from the British MP who declares "These cards are profane. Christmas is a Christian festival and should not be associated with swearing and vulgarity."

So, on this shortest day of the year, I'd like to wish one and all a happy Festivus! Patrick the Terrierman, explains why the distinguished MP is basically full of crap.

Meanwhile... I do need to throw together at least one web card for this holiday season. If you know us, watch your inboxes!
at December 21, 2008 No comments:

For no other reason than I like my free screen capture software...

While Margaret was in Michigan battling snow, cold, sleet, rain, and what-all, this was the trip I made the last week-plus. The dogs and I battled nothing but sun, wind, jackrabbits.... and abject poverty. You can help, and it won't cost you anything. Just click... you know.. up there at the top? Those things I can't mention? Do it. It will make you feel like.... Christmas!

East to West on the top, and West to East on the bottom. If you care.

Man, I've missed this place. It might be snowing and blowing elsewhere in New Mexico, but down here in Deming, it's been mostly sunny and in the mid-60s the last couple of days.

That's weather to take the dogs out in, and out we went. On Tuesday, I took Randir and Buffy to the other side of the Floridas. We jumped one jack that Buffy chased for a while, till it went through a fence. Randir didn't see it, so I didn't get the annual picture of the old dog and the rabbit. There'll be more opportunities next month when we return. Today, Sandia and Fanny got to chase 3 hares with Dutch's and Beth Ann's dogs. One was neatly dispatched after a 2 minute course.

So.. without further adieu... 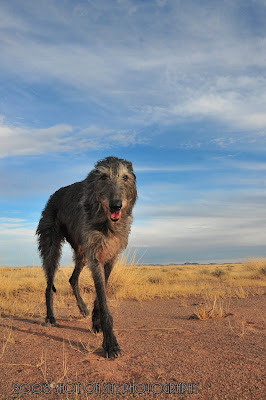 Randir. AKA "freak of nature". To paraphrase David Allan Coe*, if he looks 12 and a third, I'll kiss your ass. 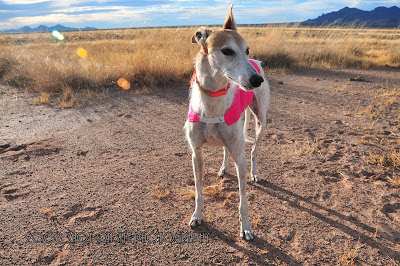 Buffy the Vampire Slayer. Still the prettiest dog on the planet. Don't you even try to disagree with me. 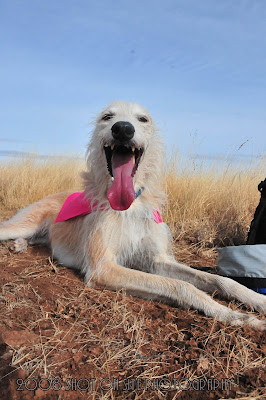 Buffy's sister, Fanny. Getting in touch with her "inner Lion". 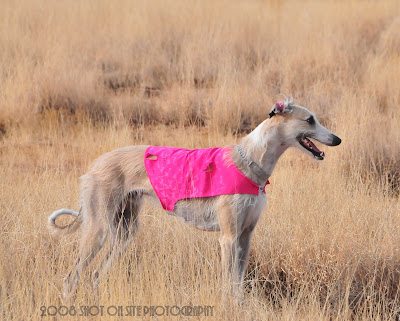 And Sandia. Now over a year and a half, and looking debonair. (And showing off the evidence that he now knows how to go through barbed wire, although the secret is to go under it.)
*Be advised, if you follow this link, it ain't work safe.
at December 17, 2008 No comments: 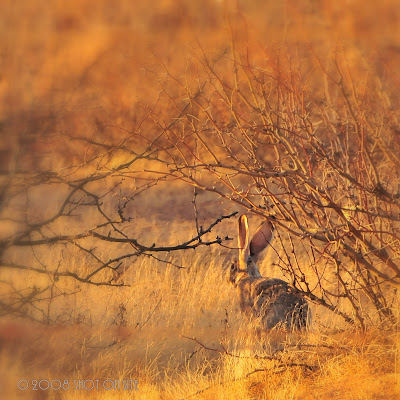 The Blacktailed Jackrabbit. Nice of him to consider the composition, too, don't you think?

I went out with the 12+ YO Randir, and the nearly 9 YO Buffy today, and got some really nice late afternoon-lit shots of them. When I figure out which ones I like best I'll post them. 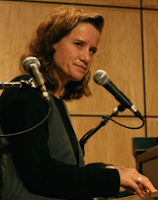 A couple years back, I wrote about Susan Werner's alternative anthem, "My Strange Nation". Recent events in America have shown that the optimism expressed at the end of the song was not misplaced, and when all is said and done, it really is a love song. 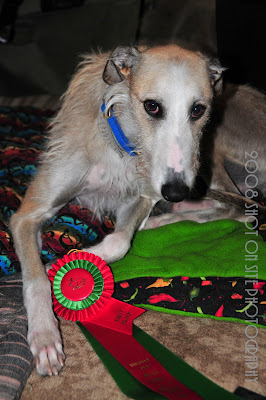 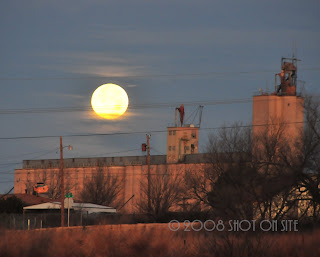 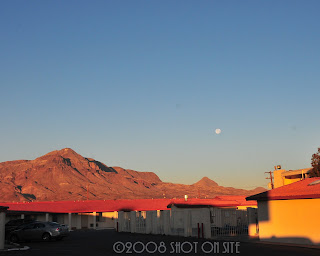 Watch for more images from the current trip on the slideshow window to the right!

As hunts go, this one was about as strange as they come. Yesterday, we had 10 dogs start, and after the first run (TCC runs two complete runs in a hunt, as opposed to a seeded final), the roster was pared by one following a tail injury on one of the dogs, which was operated on in conditions that could only be compared to Civil War field surgery. Let's just say it was uncomfortable to watch. Man, those suckers can bleed.

As reported yesterday, Sandia finished second to his sister, Maya. The Holiday Cup, (which, in fact, is not a cup at all, but a massive wooden chest with a bronze casting of what looks suspiciously like an Italian Greyhound), is awarded to the hound with the highest combined score for the two days. So we returned today minus most of the competitors. In fact, today's hunt consisted of yesterday's 1st place hound, Maya, the 5th placer, Camille, and one of the 2nd place hounds, Sandia. For the mathematically challenged, that's an entry of three. All Galgos.

But somebody had to win the cup, and there was no lack of suspense because there was only 3 points separating the hounds, so off we went to the field.

Very high winds were predicted, along with the possibility of snow or rain, so we were hoping to get this finished quick. The wind was already blowing pretty briskly as we started walking, and questioned our sanity as we had to stop every couple yards to remove "Jumping Cholla" spines from the dogs' pads.

Mercifully, we jumped the jackrabbit after only about a half hour of tramping through the mesquite, yucca, and cholla. Sandia saw it first, off to our right, and I called the "Tally Ho". The course was unexciting, as courses go, and the dogs were soon out of our sight. The judge, standing on the tailgate of her truck, saw a little more than we did, but not enough to satisfy her. She wanted a re-run, but Steve and I had had enough. We said just score it, and agreed to end the hunt on this prelim run.

Sandia won the course over Maya by one point, but he went into the day trailing by two. The "cup" went to Maya.... 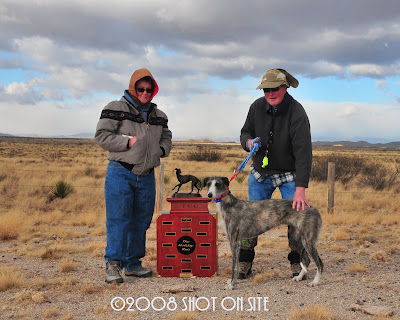 Congratulations Maya and Steve! The torch has been passed to the next generation of Galgos!
at December 14, 2008 4 comments:

Briefly- Sandia's first judged hunt would have to be viewed as a success, as he did end up tied for 2nd place (with two greyhounds). And he did finish ahead of his Aunt Camille, who finished 5th.

Of course all the southern Republican Senators voted against helping the middle class autoworkers. They were following orders from their constituents masters in Japan, Germany, and Korea.

And you thought our fathers and grandfathers won that war...
at December 12, 2008 No comments:

What? You don't know Bettie Page? Poor kids. Have Netflix send you a copy of The Notorious Bettie Page, the 2005 biopic starring Gretchan Mol.

Last Monday, I dropped Margaret off at yet another airport- Austin, TX in this case. She'll be in Michigan for a couple of weeks, then she and her mother will be flying to Georgia for Christmas with a large chunk of the family.

I returned to our parking place of late, the driveway of our good friend Sherita, in the tiny burg of Santa Anna, Texas. (Dining tip: H&H Diner. Another case of good grub in small towns. In this case, the jalapeno cheeseburger's to die for. They also make their own pies and cookies.) Sherita has wireless internet access in the driveway, so I have no excuse for not blogging for the last couple of weeks other than the usual: lazy.

I left Santa Anna this afternoon, bound for Socorro, NM where, this Saturday, a certain Spanish Greyhound will run in his first official hunt. This trip was up in the air until I actually backed out of the driveway- it seems "Mr. I've-never-seen-anything-I-wouldn't-put-in-my-mouth" last Sunday retrieved, from a nearly impossible location, the big bottle of generic Ibuprofen, chewed off the lid, and scattered the contents around the living room of the Express! This, while I was shooting the AHCA trial, and Margaret was outside manning her laptop for the clients. I didn't think he actually ingested anything because of the amount left on the floor, but it became very apparent on Monday, that he had, indeed, swallowed a couple before deciding they weren't to his taste. Evidence including diarrhea, vomiting, frequent urination.. all the typical signs of Ibuprofen toxicity.

Unfortunately, it was 24 hours after the fact, so any first aid would have been useless, and it was time for a lot of breath holding. The vomiting only lasted for a few hours. The diarrhea is still an on and off thing, but the blood- indicating stomach ulceration- is becoming less, with a regimen of Mylanta, Immodium, and yogurt. I had blood work done by the local country doc, and all the kidney numbers were normal, and the blood was clotting normally. Most importantly, his activity level is back to obnoxiously normal!

So, I hit the road. Rather late, actually, but I made it to Brownfield, TX , just East of the New Mexico border on US380. I'm staying at Coleman Park, a nice city park with 14 free full-hookup RV sites, five of which are now filled. And, as a bonus: free WiFi!

300 miles to go. I'll have high speed wireless again at Casey's in Socorro. I plan to spend a couple of days there after the hunt, and do some wildlife and landscape shooting, and will share that when it happens. And more.
at December 11, 2008 5 comments: