Where I Spent the Week 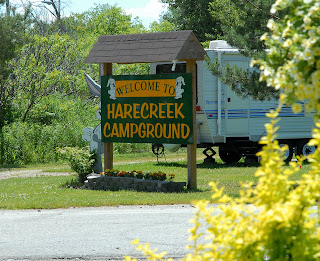 Well.... where else would you park the "Express"?

Posted by Daniel Gauss at 8:31 PM No comments:

But any more bits of information like this, and life will lose a little more of its fun. 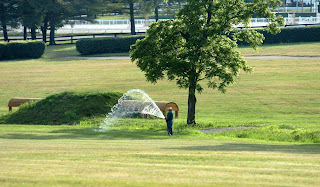 Fun image from the Kentuky Horse Park. Send your captions!
UPDATE: I thought this piece was humorously relevant.
Posted by Daniel Gauss at 8:10 AM 4 comments: 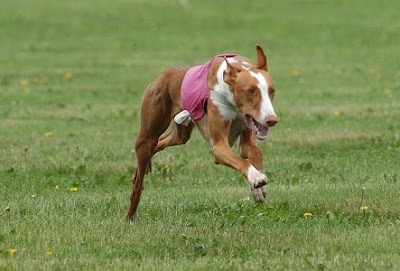 Not Sailor. (But he was the Gillette winner!).

The winner, in the eyes of the judges (which is all that really counts), 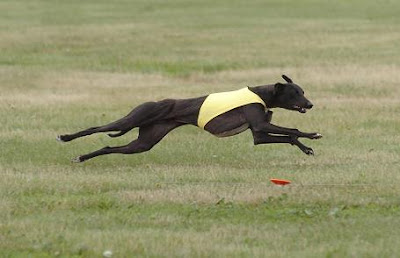 Was the Whippet, Ember.

Congratulations to all who ran fast and safely, and a "well done" to the Minnesota clubs who put on a stellar event. The gauntlet's down for next year's organizers, whoever they end up being.
See? Margaret was afraid I was going to editorialize a little too much. I think it was just right.
Posted by Daniel Gauss at 7:42 PM No comments:

The First Day Of the II

Rain was in the forecast, but it didn't happen. At least not until the trial was over. Then it rained. With a vengeance. Probably got 2 inches of heavy, heavy rain. So what if it proved the "water resistance" of our brand new EZ Up was a joke. It didn't effect the trial which, despite the wailing of the cassandras who didn't even bother to show up, went off without a hitch. The people who were here were determined to have a good time, and a good time was had by all. In fact, I'm guessing most people are happy that the grumps stayed home (you know who you are.. I don't, but I've been assured you do). The clubs who put this event on have done a great job.. I'd say better than last year's event.

Meanwhile, the sky has cleared, we've relaxed with our single malt to watch the Stanley Cup playoffs, and it looks like tomorrow morning will break as clear and sunny as this morning. And with the truncated entry, it looks like we'll be able to get out of here early and make it to Lexington on Tuesday for the Saluki specialty.

Oh yeah... and I got hit by a whippet today. I'll post the last picture I took before I said "Oh F*ck" when I get it loaded on this computer. My knee hurts. 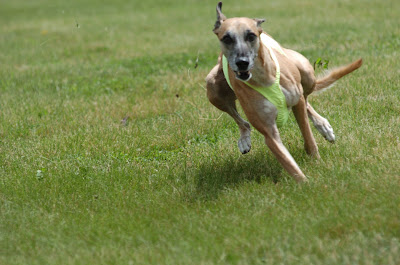 Y'know.. I think right about this point he was saying it, too!
Posted by Daniel Gauss at 8:57 PM No comments:

First Day at the II

It's the premier event of the year for ASFA. The "International Invitational". Say it loud, say it proud. And international it is. We're parked on one side of a driveway... that driveway will represent the Detroit River. On the other side of the driveway are no less than 6 vehicles sporting Ontario, Canada license plates. We must be in Michigan! But no! We're in Minnesota! Which also shares a border with Ontario.. it's a really big province!

Anyway, this is not about borders, or Canadians. It's about dogs. And while a whole lot of dog owners have chosen not to come to Minnesota for ASFA's premier event, the ones who are here are determined to have a good time.
We arrived yesterday afternoon. We were really early, and enjoyed a peaceful night's sleep at the Dakota County Fairgrounds. Tonight we're surrounded by the aforementioned Canadians, plus Virginians, Wisconsonians, Michiganders, and the occasional Arkansans and FIBs from Illinois. (Ask your mother). Not to mention dozens and dozens of Minnesotans. We had a good free dinner tonight of fried chicken, and good Minnesota wild rice (I love Minnesota wild rice!), and some really rich brownies.. So far, so good..
Many of the people who chose not to come did so based on the fields... considering them "too small". Based on the reconnoitering I've done so far, the fields look fine. The smallest of the two fields has a course over 1000 yards, and it's not cramped. The large lilac (or whatever plant it is) in the middle of the course is really going to separate the dogs who pay attention from those than don't. It should be quite entertaining. Especially if any of the dogs stop to pick up one of the thousands of chicken bones left over from last weekend's Hmong chicken food fight. Apparently the Hmong don't believe in dumpsters, having a more primitive outlook on eating. Unfortunately, I'm not shooting at this field.
I'll instead, be at the field that most recently hosted the World War III of paintball massacres. There are literally thousands of unexploded paintballs in the field. Walking through the field in a haphazard manner will leave you looking like this hapless soul... 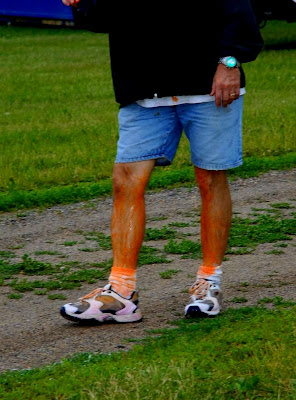 ....I can't wait to see how the white dogs look after a run through this minefield.

Anyway, that's it from Farmington, MN... and if it seems as if I'm rambling more than usual, well... 3 margaritas will do it every time.
Posted by Daniel Gauss at 8:47 PM 4 comments: