The purpose of this self-imposed hell was not to be touristas, but to photograph the performance events at the Scottish Deerhound Club of America's Centennial National Specialty... (actually, according to the catalog, the first national specialty was onlyh in 1965, but the club's been around since 1906). I also wanted to make another trip to the Frankenmuth Brewery.. an excellent microbrewery and pub, overlooking the Cass River.

But, I digress... I was shooting the ASFA lure coursing trial when this altercation broke out (precipitated by a misunderstanding in the previous corner) 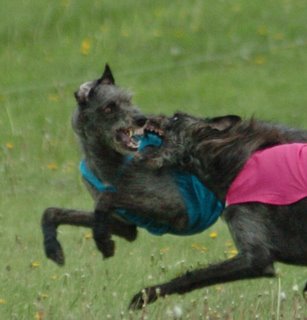 When I looked at the image.. it reminded me of something. Something very much like this:

Not exactly like this, but I couldn't find an image on the web to match what I was thinking of.. at any rate, picture fighting Chinese dragons. It was brief, but loud, and intense. Cooler heads prevaled and both dogs were dismissed to sit in the corner and think about their transgression.

If you like Scottish Deerhounds (and who wouldn't?), there are lots more images of them (behaving themselves for the most part) on our website, and if you want to know who won the various events, you can see them here

I'll leave you with my favorite shot of the whole week, and it doesn't even show a Scottish Deerhound doing anything... other than getting groomed prior to the big Parade of Champions on Saturday. I just like the way my new Nikon SB600 flash lit up the piper perfectly.

"Therapy dogs" carry infectious diseases. They're brought into some hospitals to put patients in a better mood, but a study says 80 percent of the dogs have infections that could spread to humans, including salmonella and drug-resistant E. coli." 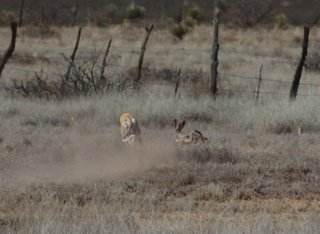 Yet another positive piece on live coursing. The backlash against the wacko's may be in full swing. Thanks again to Steve Bodio's Querencia blog via friend Margory in California, keeping the faith.
at May 16, 2006 No comments:

This has been driving me crazy. Can anyone tell me why Jack Bauer's cell phone never needs a battery charge, and never goes out of range? Even when he's 2 miles under the earth's surface? How many any time minutes do you suppose he has?
at May 15, 2006 No comments:

The Dog Press Fights Back! 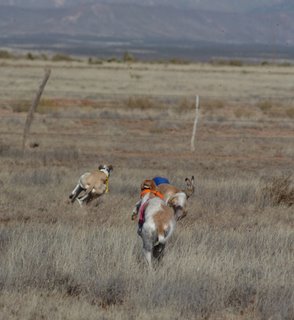 This article was just posted to a number of dog lists. Imagine... balanced reporting on a subject like live coursing! KGO in San Francisco should be so ethical. Now, if the author, M. J. Nelson would have given me the photo credit I'd be a hell of a lot happier with the article.
at May 15, 2006 No comments:

...And then there's the thousand dollar mint julep.

Ready to sit on the edge of your seat tomorrow to watch the Kentucky Derby? Then read this article, then ask yourself why. A different take on the race, to make you think. But I suppose we'll watch anyway.
at May 05, 2006 No comments: