Scottish Deerhound Club of America, National Specialty Show.. Veteran Dogs, 9 yrs and over. This is the lineup. (5 were originally entered, so I thought, "OK, you're going to win something.") 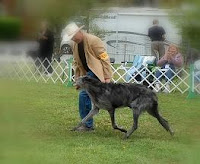 At 10 years, 8 1/2 months old, Randir was the oldest dog in the lineup by 2 months. He still moves great. We had a lot of supporters ringside... when I trotted him down and back there was a lot of cheering. 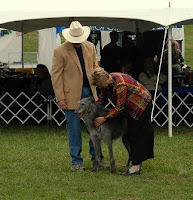 The judge said, "You've got a lot of friends." I said, "I guess so." She then moved him up to second! My boy's having a hell of a specialty! Now I have to give money to another photographer!
These images by Margaret.
Posted by Daniel Gauss at 11:23 AM 1 comment:

Scary Image of the Day 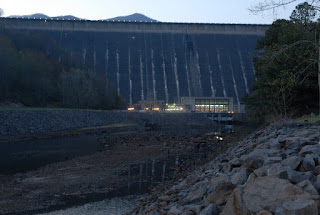 Fontana Dam. Part of the TVA system, and the highest dam east of the Mississippi. This is the view from our campsite!

Posted by Daniel Gauss at 9:12 AM No comments:

Not a lot of time, but in Monday's LGRA race meet at the SDCA specialty, my old boy managed to win the Turtle! (For the uninitiated, that's the dog with the lowest score who finishes - in a racing manner- all three of their races. It's a very coveted award). He also won the award for being the oldest (10 years, 8 months) to do the same. Cool!
Posted by Daniel Gauss at 2:25 PM 2 comments:

Posting has been light lately. No particular reason, other than we've been cursed over the last couple of weeks with poor internet signals, which is the case today. We're at the Escapees Racoon Valley RV park north of Knoxville. We'll continue on our way to the deerhound specialty on Sunday. That will be a week-long event, and if anything earth shattering happens we'll be able to post on it, from our location on the southern edge of the Great Smoky Mountains. (Earth shattering to be defined by how well Randir does in the show ring in veterans!)

Might as well show the schedule for the next couple of weeks. Following the specialty, (and a trip to Wheeling to have Rally's hock repaired), we will be at...

Updates to follow...
Posted by Daniel Gauss at 10:09 AM No comments:

The passing of an American literary icon. And iconoclast. Time to dig out the old books from storage. And get a Vonnegut film festival together from Netflix; don't think I've ever seen Mother Night.

Of all places, the best memorial I've read today, is by that dancing, globetrotting, madcap blogger, Matt Harding, (from Where the Hell is Matt? fame). Powerful stuff. And true. (but I'm still not removing the semicolon in the first paragraph!)

If you're Sirius radio subscribers, (or want to try it out online free for three days), you can catch a rebroadcast on Sunday evening, of today's "Vin Scelsa's Idiot's Delight" show, which was, in turn, a replaying of his 1996 interview with Vonnegut Jr. on his WNEW broadcast radio show. Well worth looking up.. I think it's on at either 7 or 8 PM Eastern time, Sunday April 15.
Posted by Daniel Gauss at 1:33 PM 4 comments:

Email ThisBlogThis!Share to TwitterShare to FacebookShare to Pinterest
Labels: Art and Cinema, News

With the end of the Galgo poll, I suppose you want to know the answer: The top image is Tuxedo. The bottom image is Queenie. Queenie is a Loomis, Nebraska staghound. Congratulations to those two-thirds of respondents who figured that out.
Posted by Daniel Gauss at 9:19 PM No comments:

Email ThisBlogThis!Share to TwitterShare to FacebookShare to Pinterest
Labels: Polls

Comments- and A New Poll

Maybe you noticed I let a couple of weeks go without any posts. I was simmering... a little pissed, even. I try to make this blog informative, and to an even greater extent: entertaining. Other than a couple of comments that I actively solicited, I got no feedback on my April Fools Day post.

I realized part of the problem was that comments on this blog are moderated.. and you have to create an identity (even if it's "anonymous"). Maybe more work than you're willing to put in to it. (Or maybe you really believe "Bubba's" ancestors were created by Georgia hillbillies!)

So, I'm thinking of unmoderating the comments section. I originally did it because I got spam comments. I've created a new poll.. over on the sidebar. If the numbers support it, I'll remove the hard parts...
Posted by Daniel Gauss at 9:07 PM No comments: 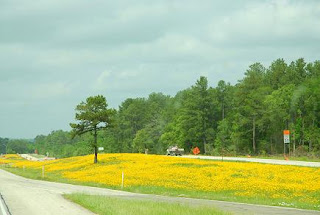 April 3, 2007 Interstate 45 near Huntsville, TX. (Where they do the needle thing... I hear the Texas legislature is considering the death penalty for jaywalkers. And down the line, they may want to also kill people who wear stripes with plaid, or polyester.) The wildflowers were blooming, the weather was downright hot.. and humid. The sun was shining. Ahhh Spring!! 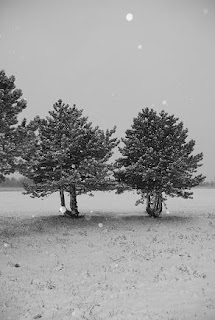 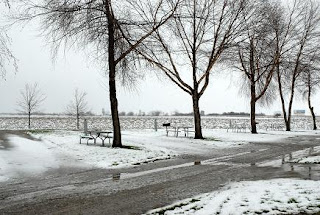 April 11, 2007 Kellogg RV Park, Kellogg, IA. There's a disturbing pattern developing here. Can you see it? Remember that cute little lamb picture from March 31... that was supposed to signify "March goes out like a lamb". Apparently, that lamb had another agenda, because once he went silently into the barn, he apparently transformed himself into Hannibal Lector!

This has already been a record-breaking Fall/Winter/Spring for us, weatherwise... this latest bunch of white precipitation will just assure that the record is never broken. So there is a plus-side, I guess: It will never be this bad again.

Posted by Daniel Gauss at 1:58 PM No comments:

The "Bubba Poll" is now closed. For those waiting breathlessly for the answer... It's Georgia. That's right, Georgia. And not the one over there in the old Soviet Union.. the one in the American South. Bubba is an
Appalachian Corn Hound;or rather he's descended from the Corn Hounds, which were first created in the North Georgia mountains at the turn of the last century by mountain men who needed sturdy guard animals to protect their "corn likker" stills. Borrowing heavily from the French Great Pyrenees, for size, American Pitbulls for tenacity, and an occasional greyhound for speed in pursuing the hated "Revenoors" out of the mountains, these ingenius mountain dwellers produced a hound whose only vice was a taste for fine French wines and cognacs. Alas, this was to lead to the ultimate demise of the breed, even though it guaranteed that they would stay out of the moonshine. Because of their expensive tastes, these poor hill folk were unable to afford to keep this handsome dog. Additionally, the Corn Hound was able to somehow maintain beautiful strong, white teeth throughout their lifespans, which led to poor self-esteem among the very people that created them.

The entire population was, therefore, shipped off to Texas during the Great Depression, where the somewhat-wealthy Sheep Barons were able employ them in their current capacity, as sheep guarding dogs. So that's Bubba's story.. so rare, you won't even find it in Wikipedia!

And Bubba's an Akbash. From Turkey.
Congratulations to all who got it right. Texas, Todd?? ;)
Posted by Daniel Gauss at 9:40 AM No comments: