Email ThisBlogThis!Share to TwitterShare to FacebookShare to Pinterest
Labels: Food and Health 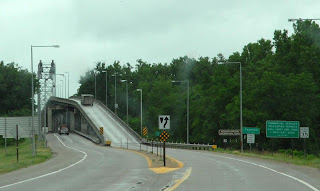 Is this the scariest bridge in the US? I can't say, not having crossed every bridge in the US... but this one tops my personal list! Just look at this sucker... it's what I'd call an "over/under" design, only instead of the usual 2, or 4 lanes above and below, this is a single lane, as it crosses the Missouri River between Nebraska and Yankton, South Dakota, (hometown, apparently, of Tom Brokaw).

It's not exactly a wide lane, either. Add our high profile vehicle, and a strong, gusty

wind coming from the West (our Left), and you've got a recipe for white knuckle driving.

This was the second time we'd ever crossed this bridge, and it wasn't any more fun than the first time. 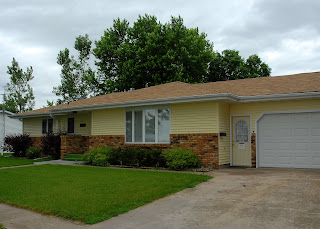 Everywhere we go, someone invariably asks, "So, where do you guys call home?". Well, here it is. Really. This is 411 N. 6th Street, Emery, South Dakota, 57332. Our "home" has been in Emery for nearly 4 years now. We've been here exactly three times, most recently this afternoon. Picked up the mail, and we're on our way to Minnesota for the II. See some of you there!

Email ThisBlogThis!Share to TwitterShare to FacebookShare to Pinterest
Labels: Travel 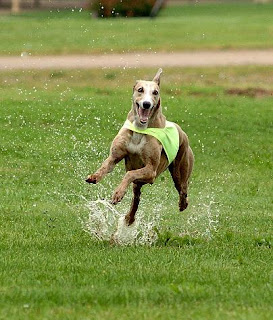 Here's a fun image, typical of the entire field.. on Saturday.. 16 hours before the 3+ inches that fell on Sunday morning. This was what was left from the Thursday and Friday rain. But doesn't include today's rain. Does "soggy" make sense now? 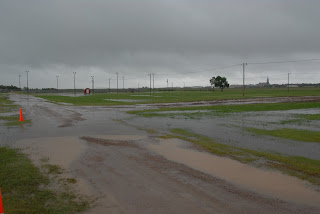 What a soggy weekend in Oklahoma. Lots of great roostertail images yesterday, but today it started raining about 4am, and was still raining during the JC rollcall, while the organizers scrambled around to shorten the course so that it could be run without bogging down and burning up the motors. Didn't happen. Trial and Tests cancelled.

Some would say the whole Presidential process is comedy, but far be it from me...

Anyway, saw this this morning on George Stephanopoulos. George thinks it's the best ad of the early campaign. I can't disagree. Fairly compelling case for the candidate as well.

Frankly, I Never Would Have Gone Beyond the Clay Model Phase.

We're resting up after Silkenfest. Spending a couple of nights at the Pin Oak Creek RV Park in Villa Ridge, MO. Several of the Silken folk had somehow discovered The Hawthorne Inn during their specialty. They didn't say it was good or bad, just that it had a bar, and when the specialty was over, many of them needed a drink.

Well, this place is in Union, about 5 miles from the campground. Margaret needed to go to the post office, so we decided to have lunch there. What can I say? We keep bumbling into just the very best places. (So far, we've been lucky enough not to stumble into a place so bad I need to blog it... but believe me, I'll do it when it happens!).

Just plain outrageous presentation for lunch- (I'll have to start taking the camera to meals.. again, almost too pretty to eat). I had Grouper Diablo... a large grouper filet broiled and topped with a delicious scallion sauce. Margaret had Macadamia Mahi... yeah a Macadamia Nut crusted Mahi Mahi, smothered with a pineapple mango chutney. Both had shells in a creamy sauce on the side, and a really good dinner salad. Atmosphere was quiet, with dark wood, belying the fact that it was in a brand new strip plaza, in a very brand new commercial area of what was obviously not too long ago a quiet country village. Even the college across the road looks brand new. A well stocked bar, which we'll have to try the next trip.. (Margaret always talks me out of booze or wine at lunchtime.)

Tonight we'll be eating at Super Smokers,because the road goes on forever, and the party never ends!
at May 22, 2007 No comments:

I don't live in California, and I don't ever intend to visit there again if this piece of excrement bill passes. Thanks to George Bell for creating this film, and HT to Margory Cohen for alerting us to its existence.

I mentioned in a previous post I'd update Rally's progress. I can't recall if I posted about her original injury, but for the record, it was late February, and we were out in a small field near Roswell. I just had Rally, and David Hise had a new Saluki x Greyhound he was trying out. Rally was out of position when the hare jumped, but soon caught up with the Saluki. They turned the hare hard left.. 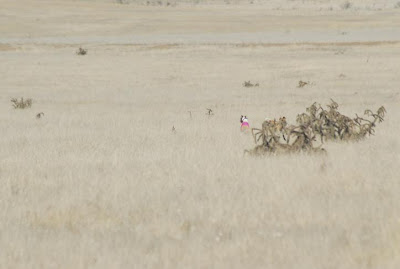 ...and within another 2-3 strides Rally pulled up. And slowly came back to me on three legs. Within a few minutes, the area below the hock swelled significantly... 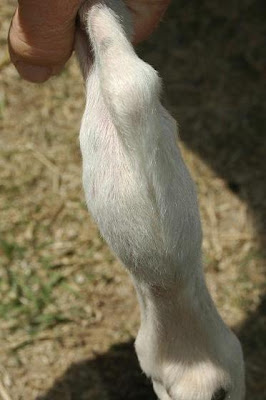 We were going to be in Texas within a week, and I planned on getting X-Rays done by a country vet we'd gone to previously, in Santa Anna. So I just iced the area several times a day, and alternated Bigel Oil wraps, with DMSO/Dexamethasone treatment. It took a long time- almost 10 days- for the swelling to abate.

The good news is that the X-Rays showed no fractures. We sent them off to Dr. Radcliffe in West Virginia to be sure we weren't missing anything. Unfortunately, Dr. Jim was unable to see the X-Rays when they arrived. He couldn't see anything when they arrived, and it would be more than a month before he could see anything... but that's another story.

Without a fracture, I decided we could wait on treatment until we could go to WV in person. That would be after the Deerhound Specialty in late April, or two months hence.

So wait we did. Dr. Radcliffe diagnosed a torn.. ("shredded" was his exact word).. plantar ligament. Too short to repair, so it was replaced, with a length of stainless steel wire. 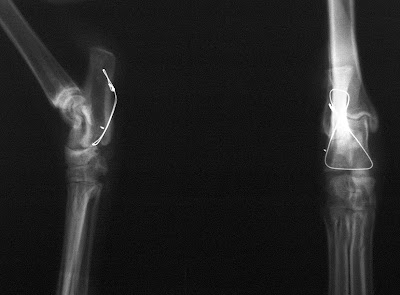 The Doctor said they've got dogs running at Wheeling Downs with this repair, so she should be as good as new in 4-6 weeks. You know, that calcaneous bone is a handy attachment point; I'm thinking of having mudflaps installed when we go back for Rally's follow up! I'm tired of getting dirt-spattered on starts.
at May 22, 2007 No comments: 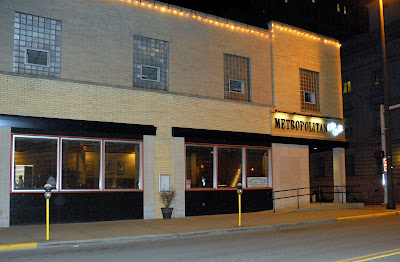 Most, if not nearly all, readers of this blog, are sighthound owners; and as such, will have reason sometime in their lives to have to travel to Wheeling, WV. When that unlucky event happens, do not... I repeat, DO NOT.. leave Wheeling without eating here: The Metropolitan Citi Grill, on the corner of Chaplin and 12th, in the heart of downtown, right across the street from the Federal Courthouse.

While Rally was recovering from her ligament replacement surgery at Town & Country Animal Hospital, we went out to dinner with her well known surgeon and his wife. In the past, we'd always go to the River City Brewery & Pub... a very good place, with very good beer and food. But the Metropolitan Citi Grill had opened since our last overnight visit to Wheeling, and I must say, our brewpub days are probably over.

Simply put, this is the best food I've eaten in years... possibly ever! Seriously. Try Balsamic marinated Filets Mignon over bowtie pasta with some kind of really great sauce. And it didn't just taste good. The presentation almost made it too pretty to eat. And everything Margaret and Jim and Judy had was met with many satisfying noises. Normal conversation was generally replaced for a good half hour with "Mmmmmmm", and "Oooooh". I wish I could remember what they all had, but nobody was complaining. I'm trying to get the good doctor to send me a menu so I can do the place a little more justice.

Till then, this place will remain a big secret.. really. They have no website. There are no posts to ChefMoz or Chowhounds. I couldn't find a single newspaper review, and I even checked the Pittsburgh papers.

Anyway, take it from me. And from Margaret. And from Dr. Jim and Judy. This place is awesome. Especially if someone else buys. Next trip, it's on us... and I hope it's just a social call.
at May 16, 2007 3 comments:

Email ThisBlogThis!Share to TwitterShare to FacebookShare to Pinterest
Labels: Food and Health, Travel

This weekend, Silkenfest; I hear tell they've got 48 pre-entries for their race meet on Sunday. Memorial Day Weekend will find us in Shawnee, OK for Indian Nations Basenji Club's AKC trials, followed by the ASFA II in Minnesota, and then the Saluki Club of America specialty in Lexington, KY. We've got some heavy travel in our future...

I also need to do a quick writeup on one of the best restaurants we've ever eaten at - in Wheeling, West Virginia!!! - and an update on Rally's foot surgery. The two are sort of related...
at May 14, 2007 1 comment:

We bought the T-Shirt.
The Deerhound Specialty being over, we finally had to time to explore America's Number 1 motorcycle and sportscar destination.. The Tail of the Dragon. That's the portion of US129 that runs from Deal's Gap, NC north into Tennessee for 11 miles. In those 11 miles, the road has 318 curves! And all as smooth as a baby's butt, as you can see above. And all up and down, no flat places.
We took a few pictures, which you can see at the the Shot On Site website , but for the best images from the Dragon go to Killboy.com. That's "Killboy" (aka Darryl Cannon) on the right in the image below.. we had a chance to stop and chat on Sunday. Note that he's not the one with the camera. I can only hope that our business is so successful someday that we can hire associates to do the shooting for us. ;) 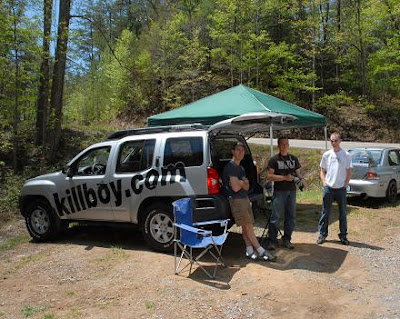 All kidding aside, Darryl was on his way to shoot at another curve, so we were lucky to find him here. There is always someone from Killboy.com at the Dragon... every day. If you go to his site, you'll probably even see us buzzing by!

This week, there are over 500 Mini Coopers there. Like I said, a serious driving destination. It was by far the most fun I've ever had driving the Escape, and Margaret only told me to slow down once in 22 miles!
at May 03, 2007 1 comment: