Sometimes The Onion writers step over the lines of good taste.
That's why I just love them!
at September 24, 2008 No comments:

I Read Blog for Bark Obama.

Well whaddya know.... news that will impress about 85% of our friends:

My partisan leanings have caught the attention of those lovable curmudgeons over at Bark Obama , and they have had the audacity to invite me in to their circle. You may have noticed that the widget in the sidebar has changed slightly.

Who are the Bark Obama writers? Well, just just check out this roster!. That's an all star cast of the folks who, when they're not proselytising on the merits of our next President, are writing the stuff you read the most.. on blogs, in books, and in magazines... about your pets.

And my non-dog aquaintances are always telling me to get a life. Hell... see? We got life!

Wednesdays and Thursdays are two of my favorite days of the week on Sirius radio . For two hours (more or less) each day, Vin Scelsa reprises the glory days of FM "freeform" radio, broadcasting live from his basement studio in the hills of northern New Jersey.

One song he plays, without fail, every single week is one that maybe we should hear on a daily basis during this political silly season:


Especially relevant for a certain campaign that will remain nameless here... but they like to talk about a bridge. ;-)
at September 18, 2008 2 comments:

Brother Patrick Explains it all for You!

Confused about the whirlwind of activity... the ups and downs... the panic and fear going on on Wall Street for the past couple of weeks? Like John McSame, I don't know as much about economics as I should.

Thanks to Pat Burns the Terrierman, I can point you to an explanation that will make it all clear... especially for our fellow dog friends. Prepare to be severely pissed.

But don't worry.. according the the alleged President this morning, wrongdoers are going to be "persecuted" . (That mean they'll have dollar signs burned on their lawns? Heckled at the workplace? Sugar in the gas tanks of their Escalades?)

Even Mindless TV Can Rock.

Who watches "America's Got Talent"? We got kind of hooked 2 years ago. So tonight we'll see the final 5. If America votes intelligently....*

these guys are my pick to be standing at the very end.

*"No one ever went broke underestimating the intelligence of the American people."- Henry L. Mencken
at September 18, 2008 No comments:

Avast! Come midnight tonight, ye better be ready to Talk Like a Pirate! or ye'll be walkin' the plank and feedin' the fishes. Or, to put it another way: "Über die Planke schicken"

The nation held it's breath.

The question on everyone's mind: How would she do? This would be a role she'd never before been cast in. The Republicans were tense. Democrats, too. This could be the deal breaker... or the deal maker of the whole presidential campaign.

In the end, as if there was ever a doubt- she didn't just hit a home run. She hit it clear out of the park.

"Dan", you're saying, "have you switched parties?".

Of course not. I'm talking about Tina Fey on SNL last night:

Perfect. Right down to the Frances McDormand "Fargo" inflection. She's still so damned hot! And a major talent on both sides of the camera.

As if I ever had a doubt.

(Watch it while you can.. NBC apparently doesn't like its stuff on YouTube for some reason, and this may be pulled.)

UPDATE: As predicted, NBC pulled the clip off YouTube, but thanks to Andrew at Regal Vizsla we've got another link up. Watch it while you can.
at September 14, 2008 No comments: 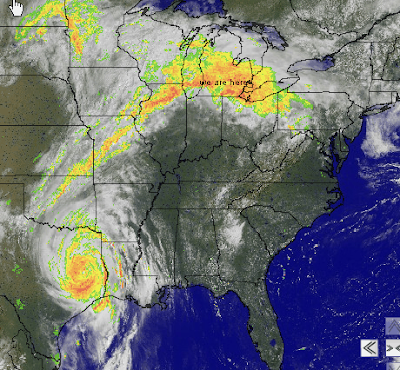 Notice our schedule to the right, I've called the Raisin River River Raisin Rhodesian Ridgeback Club, (Yeah, I know what they call it, but my way is correct), trial "rained out". Actually, I don't know if the trial itself is rained out. I just know that I'm not going to stand out in a steady rain all day. And I'm not going to chance getting stuck in their very iffy parking area. It began raining here yesterday afternoon. We had a couple hours respite last night, but it began again in earnest around 1AM. It's been raining ever since. It's supposed to rain all day, and all night, too. And this isn't even "Ike", yet, the remnants of which are scheduled to roll in here on Sunday (My Official Geezer Birthday!), dropping up to 4" of rain! At least there's no wind, no lightning. Just rain.

Good day to watch some football, and maybe... finally... finish up the toilet project!
at September 13, 2008 2 comments:

We needed to go out on some errands today. Simple stuff, like some plumbing supplies for the ongoing toilet project- don't ask- , a trip to the post office, Sam's Club. Travelling West on Michigan Ave in Jackson we came upon gas station after gas station with long lines of idling vehicles.. burning untold numbers of barrels of fuel while waiting to (wait for it)... fuel up. I asked, "what do they know that we don't?".
As we finished up we heard reports of "$5/gal gas" on the "east side". Well, when we got to "the east side", it was still $3.89. Just like it was when we began our errands. Ridiculously long lines, though. Fortunately, we're not going anywhere this weekend, so we just drove by and laughed at the morons. Must be some way to pin this on Republicans.
at September 12, 2008 No comments:

Wasn't this campaign going to be, uh, different? Tell 'em you're sick of it.

As the final frame says.. "Psst. Do Something."

A new Republican ad, shows McSame and Michael Palin, over a bunch of misleading statements, and calling them "The Original Mavericks".
FactCheck hasn't parsed this ad yet, but the title alone is the biggest lie. I mean, c'mon, I'm old enough to remember, so you'd think a real geezer like ol' dishonest John would remember too... the real "original Mavericks"...... 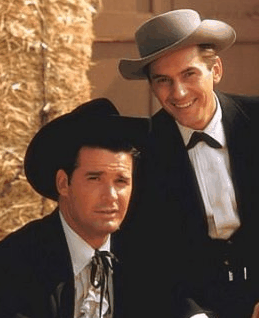 There are straight, academic places online where you can get the straight scoop. The best of these is Annenberg's FactCheck.Org which analyzes political ads and campaign statements for accuracy and context, regardless of political party. I check it out every time I see an ad that raises my blood pressure.

But I enjoy laughter and humor with my political exposés, and for that, there's only one place to go, (and all the great HBO and Showtime programming aside, the real reason I want satellite TV in the Express), and that's The Daily Show:

This segment is being hailed, on FARK, as the best Daily Show segment... ever. Pushes all of my (political) buttons.
at September 04, 2008 No comments: