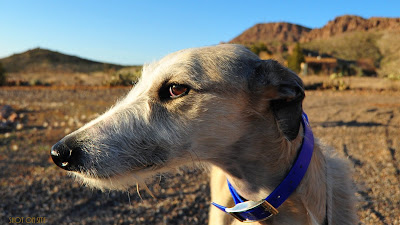 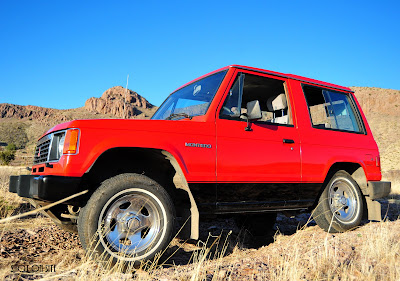 I had my eye on this little buggy ever since it first showed up on D & D Auto's lot back in October.  If you live here, you need at least one 4 X 4 runabout.  Not for snow or ice, but for the mud that covers the roads out in the valley, and for the rocky roads you have to negotiate up in the hills, especially if you're going to a start point for a hike and climb, or geocaching. (It's parked on a "road" in the above photo).  There's no shortage here of Jeeps, Sidekicks, Trackers, Broncos and Bronco II.  It may not get driven as much as the Escape or even the van, but when it goes out, it will be because it's needed.
Or just for fun.
Facts: 1987 Mitsubishi Montero Sport 4 x 4.  105,000 miles (!)  It will be getting more serious tires early next week.  It's red! :-)
at February 18, 2010 2 comments: 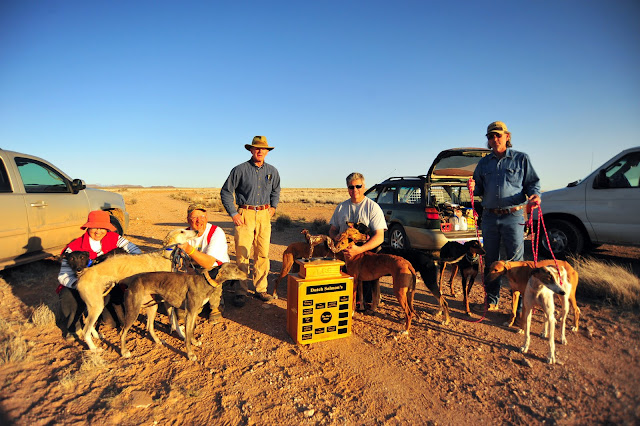 *One Third of Dutch Salmon's Pack Hunt. (Details to follow when we recover from the 12 mile forced march.  Click image to see all the winners.)
at February 13, 2010 No comments:

We went out with the All Girl Hunt again on Sunday... me with Willow and Ashley, Dutch with Phyllis, Cinnamon, and the eunuch JRT cross, "Jack".  We went to a field that had been fairly barren of late, and we'd left it alone for several weeks.  Additionally, we decided to go north instead of our usual route south.  We hadn't gone north in almost two months, and on this day we were going to go further north than we ever had.  This would prove to be a pretty good idea, as the GPS track above indicates.

I was walking Willow on a slip, because she had shown more than a passing interest in Jack.. as potential prey, not as a hunting buddy.  I thought it would be a good idea for her to get used to him.  We jumped the first jack pretty quickly (start and finish point of the day's walk is the lower left corner).  Willow showed an impressive burst of speed initially, but after a minute was well behind the group, which ended up in the foothill rock and scrub which effectively ended the course.

We walked a good distance further north when all hell broke loose.  A hare popped up, and the dogs gave chase.  I slipped Willow, and she took off in the opposite direction!  I thought, "Oh, she doesn't see it".  Au Contraire... she was off on a different rabbit!  We'd jumped two at once, and Willow had exclusive use of the second one.  While Dutch watched the main group, I followed Willow's progress, as she worked it pretty well, until... 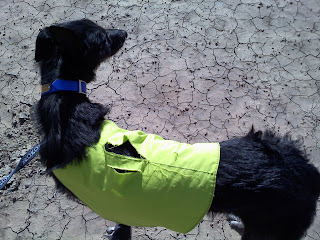 ... it went under the fence, which is how Willow learned the "fence lesson".  Go under it like the jack does.. and like the Pronhorn does:  the bottom strand is not barbed.  They usually only make this mistake once, and fortunaely, there were no matching lacerations under the blanket.  Margaret will  have an opportunity to try out the brand new, in-the-box Singer she got at last weekend's auction for $30!

Shortly after the fun with JR's 9A and 9B, I spotted another, who stayed out of everyone's sight, scooting low to the west.  The dogs didn't see it, thus "JR10nc" as in "no course".

Our day wasn't quite done as we made one more north-south sweep, and just as we were approaching the road that runs through the the middle of the fields, we found one more to chase.  By this time, I felt comfortable enough with Willow's ability to find her way back that I was letting her free course.  She was still showing some interest in Jack, but it was more curiosity now, than something like lunch.  This course was short, as the rabbit made straight for the brush.  After four good chases, one which ended up with the rare instance of the rabbit jumping into a hole, we decided to head back for the vehicles.

I called this post "Combing the Fields" because I thought the track was going to look like the teeth of a comb, (which it does.. a very small comb), and I thought we were going to to go up and down a few more times than we actually did.  Making only 4 sweeps, the track looks like something completely different, doesn't it?  Can you see the rabbit?  And not just any rabbit...  Maybe I should have named the post: "Frank"

Maybe the Best Course I Ever Never Saw!

Dutch couldn't make it out with us yesterday, but that was OK.  Our guys have been running well lately, and with a fair amount of success.  It was time to see if they could duplicate that success without the help from Dutch's dogs.. particularly Angie and Phyllis.  It was time to do a Pack Hunt "pre test" on Sandia and Ashley.
So Mrs. Shotonsite and I rounded up the two, and threw in Willow for the exercise, and headed out to a field we've left alone for several weeks in the hopes it would produce some jackrabbits.
As is our usual habit when not meeting Dutch, we were running quite late; by a few hours.  It was almost Noon.  Fortunately, there was a decent breeze from the North, so it was not as warm- at least initially- as it was forecast to be.
We headed south, following a draw that's been known to hide rabbits in the past, but not this time.  We had Sandia and Ashley offlead, free coursing.  Sandia is very, very good at finding the hares.  But they were running around like maniacs, which isn't their normal style.  You'd have thought they hadn't been in the field in weeks, when it was only two days.
Somewhere around 3/4 mile, we began to lose our breeze, and it started to get warm.  I decided if one of them was on a slip, the other would slow down and stay close.  I grabbed Ashley, got her slipped up, and as soon as we started walking again, wouldn't you know it, Sandia jumped a jack!
Away they went,  heading south. The rabbit got on the road with Sandia within inches of it, and Ashley catching up quickly.  Willow was bringing up the rear and getting good exercise!  Soon, Sandia wrenched the rabbit to the left, over a berm, and down from the high ground we were standing on.
In a field known for giving hunters unobstructed views of entire courses, no matter how long they run, we were standing in absolutely the worst place we could be.  Once they dropped out of sight , we didn't see them again.  We walked toward the edge, looking out on the flat, but they weren't there.  We couldn't see them anywhere.
About the time we were approaching the edge, Willow came back.  I don't think she ran very far, and being a black dog with a fairly heavy coat, I didn't mind.  She seemed fine, and we continued to look for the other two dogs.  I was blowing the Fox 40 continuously.  This was very unlike them, especially Sandia, who hustles back very quickly at the end of each course.  We even looked behind us in case they returned via the great circle route.  Not there.
Finally, I spotted two specs approaching from the south.  They had run a very, very great distance.  When they had been out of sight for such a long time, I shut off my stopwatch.  It registered 2:51.  I'm thinking now I may have been premature.  They probably ran close to 3:30, and maybe even more.  When they finally got back to us they were really beat.  Both were in a froth, and more exhausted than I've seen them this season, and they are in very good shape, sometimes running as many as 5 hares in a day.
Then I took a good look at Sandia.. 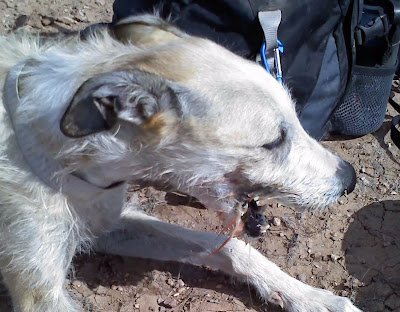 ,,,and his beard showed me everything I needed to know.  Blood.  They'd run that sucker down.  Ashley had blood on her, too.  It looks like they tried to carry it back, but it was too far, and they were too bushed.
We decided they were done for this day, and headed back to the van, our little experiment successfully completed
at February 03, 2010 No comments: