The title is a link... check it out. Your health will benefit. (Other links will appear in the near future, as soon as I learn the code to put them there.)

So begins our days as tourists, and let me tell you, this doesn't happen often enough. We packed up Rally and Fanny, and headed south on US31, then East on M72, our ultimate destination the Traverse Bay and Leelanau Peninsula of Northwest Michigan; home of cherries: The National Cherry Festival, Cherry Capitol Airport, Cherry wines, Cherry Chocolate Truffles, Cherry Orchards, and even, as we discovered, Cherry dog biscuits (called "Hip Bones", because of the anti-oxidant benefits found in the tart cherry).

We decided not to stop in the "Fudgie" haven 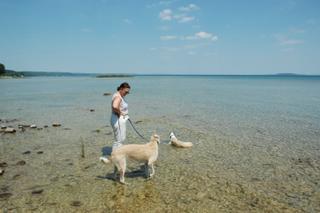 of Traverse City itself, and go on to Leelanau Peninsula... a large point of land bordered by Lake Michigan on the West, and the West Arm of Grand Traverse Bay on the East. We stopped so the dogs could get wet in Traverse Bay. Rally decided that total immersion was the best way to keep cool on a day where the temperature was rapidly climbing. It was very shallow, and rocky here, but as you can see, we're talking big water here, folks.

Some friends of mine think North Georgia, or Brooklyn are God's Country, but listen to your bodies, which are 80% water.... God's Country is where the water is!

Our next stop was at the Black Star Farm Winery, on the Eastern shore of the peninsula, just South of Sutton's Bay. T 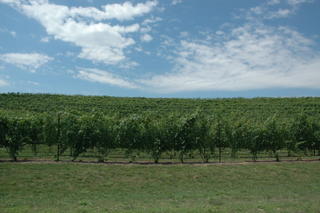 his is just one of dozens of wineries on Leelanau, and Old Mission Peninsulas.. before you laugh, this is prime wine producing country- the 45th parallel goes straight through the area, as it does the Napa and Bordeaux regions in other parts of the country, and the world. The area is hilly, the soil sandy, the climate arid... (well, normally, but you'd be hard pressed to prove it on this day).

When I first started coming up here, the varietals were primarily whites- Reislings, etc., and, of course, the fruit wines of the region, most notably cherry. These were surprisingly dry, and not at all what you would expect. We purchased a couple of bottles, so you will be able to see for yourselves if we happen to crack one open at a trial or race meet in the near future!

That said, the whites are still the best. The Pinots and other red varietals left me unimpressed, but I admire their ambition. On this day, I tasted a barrel-aged Chardonney that would stand up to any I've had. 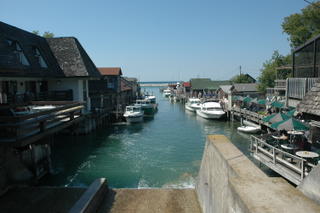 We then decided to head across the peninsula to historic Leland, one of the early fishing centers of the Great Lakes. Now, a prime tourist destination, with shops, restaurants, bars, inns- but vestiges of it's past remain, with the shanties, and the old fishing boats... We had an excellent lunch at the Bluebird, which is occasionally haunted by the writer Jim Harrison, when he's not at his other favorite Michigan village, Grand Marais, in the Upper Peninsula.

After lunch, we headed to the waterfront, where I took the picture of "Fishtown", and then to the marina, where I snapped this example of the "little" pleasure craft than come in to tie up. 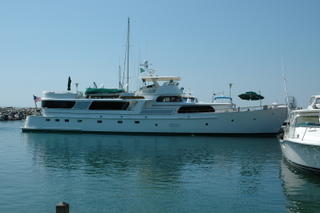 Then it was down M22, following the Lake Michigan shore towards Sleeping Bear Dunes National Lakeshore. Just inside the Federal boundaries is Good Harbor Beach, where I spent many days in the water in a previous lifetime...
We thought it would be a good time to let the girls sample the waters of the sec 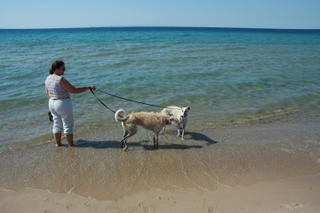 ond-biggest Great Lake. Rally wasn't keen on the waves- she should see it when the West wind really picks up!

Unlike Traverse Bay, this was all sand... the entire West Coast of Michigan's lower peninsula is sand and dunes; almost 400 miles of it! Good Harbor beach is nice in that it is dog friendly- at least half of it is... when you come out of the parking area, dogs are not welcome to the left (south), but are welcome to the right, (north). There were several out on this day, chasing Frisbees into the surf, and just having a ball.

As I said, I'd previously spent quite a bit of time at this beach, and it was time to try and find another old haunt: Pyamid Point. Pyrami 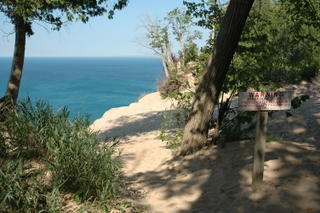 d Point juts out into Lake Michigan, about 10 miles south of Good Harbor Beach. It also rises about 400 feet above the lake, on a very steep sand dune bluff. Unfortunately, there was no one walking on the beach, so I couldn't get any scale shooting straight down, so I thought I'd let the National Park Service let you know how high, steep, and dangerous it is. By the way, the trail from the parking lot is about a mile long, and also very, very steep! I noticed that the top of the dune, as dunes will do, is relentlessly marching East. Several trees on the East side of the crest have been pretty much swallowed up. 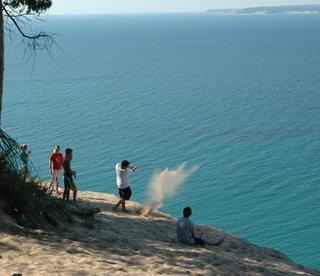 turing some of the ways people enjoy themselves after the climb. Besides working on golf shots, others go off to the back recesses and probably get naked. And other stuff. South Manitou Island, which is also part of the Sleeping Bear Dunes National Lakeshore, can be seen in the distance. The golf shot did not carry. But ferry service out of Leland, will take you there, and it's a whole 'nother fun place to hike, camp, climb, and swim.


It was getting late, so we decided to forego the rest of the trip south to Glen Arbor and it's shop, Cherry Republic. It was time to head back to the campground to see Buffy and Randir, who'd spent the day in the air-conditioned comfort of the Express. While passing through Traverse City, I had Margaret snap this shot, which is indisputable proof that this is a very special place. 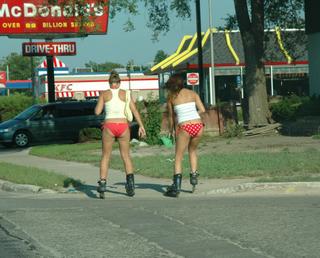 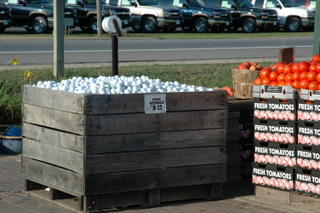 
This is old (from the Spring, still in Texas), but I just came across it playing with Picasa. Where do Scissor-tailed Flycatchers come from? 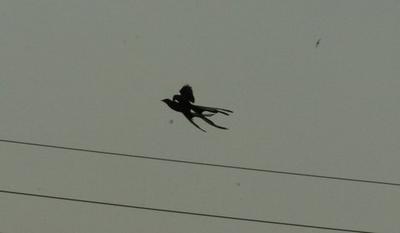 
...that's Northern Michigan to the uninformed among you. And it's where we are this weekend, just south of C

harlevoix, and just east of Lake Michigan. They do two things well up here: They cater to tourism in a big way, and they grow the best fruit in the world. Northwest Michigan is the Sweet, and Tart Cherry capitol of the planet, and they're all in season right now. In this picture we happen to be parked in front of a pear orchard, but there are cherry trees up and to the right. Also, apples, peaches.... pumpkin pie..??? Ooops, got sidetracked there. Blueberries, too! All the healthy, antioxidant fruits.

We're up here for a craft show. We're set up amongst the woodburners, glass etchers, trivet

firers, clothing painters, and guys who make tables, chairs, and bars out of big treestumps, and slather it with 6 inches of varnish. I'd like it in my house... if I were a hobbit. We just have 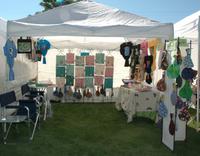 our photo tee-shirts, totes, and Margaret's handmade jewelry. Here's the booth... looking a bit different than our normal field trial setup. Ask Margaret about the jewelry the next time you're at a field trial!

Once the fair is over, we're going 31 miles southeast, to Lakes of the North... a residential resort community that has a campground. Margaret's parents have a lot there, so we'll get to park really cheap, and then we'll play tourist for a couple of days. Ummmm, fudge.

After playing tourist, we'll be going to Wisconsin for a couple more art/craft fairs- one in Waukesha, and one near Madison. Then we'll get back to the blessed hounds, and shoot the Midwest Coursing Club's trial at the end of the month. That will bring us up to Labor Day, and I'll rant about that later.

Meanwhile, please scroll down to the previous post, and help us out with the vanity license plate poll. Later.
at August 05, 2005 2 comments: