Very Early in the Morning. 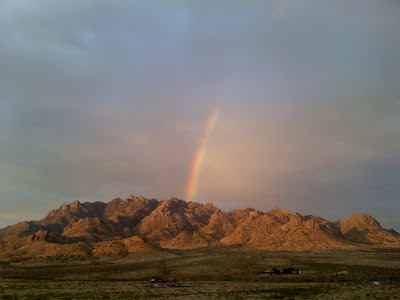 Most mornings, when Sandia demands to be let out at 6AM, I get really cranky, and ignore the barking as best I can. But there are advantages to getting up so early in the morning... for instance, we would have missed this amazing rainbow over the Floridas had we slept in just another 30 minutes!
Watching the weather radar, the rain causing the rainbow made an S-curve through the gap to the left and went behind the Little Floridas, missing us. Again. The annual "monsoonal flow" has begun, but you couldn't prove it by us. We can sit on the porch and watch it rain on Deming, but so far, with the exception of an hour-long splash the other night, it keeps missing us. At least it keeps the weeds down.
By the way, this was taken with my new phone! It's got an amazing camera. It's an LG enV Touch, with a 3.2MP camera with a Schneider Kreuznach lens, and tons of editing software. I'm using it a lot!
at June 26, 2009 No comments: 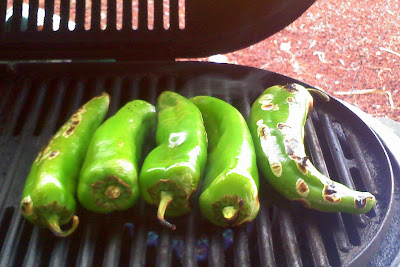 The other day while we were shopping at Pepper's Supermarket (a very popular store not effected whatsoever by the existence of the Supercenter in town), it occurred to me that if we were going to be long-term residents of New Mexico, it was time to reduce our dependence on canned green chiles, and get ourselves some fresh. Alas, the peppers from uh, Pepper's, are not New Mexico peppers from Hatch, NM, but are a product of Mexico. New Mexico grows twice as many green chiles, (similar to Anaheim, or Big Jim chiles), as the next biggest grower, California.
Hear me now and believe me later, come August-September, we'll be roasting Hatch chiles here at the Hare Brained Homestead. The aroma of roasting chiles is everything they say it is. These guys are now in the freezer, to be used the next time we fire up the grill for burgers, or make us some huevos for breakfast. Yum.
PS: The spell checker wants me to change the spelling of chiles. Ain't gonna happen. In NM, this is the correct spelling and I'm sticking to it!
Oh, and the answer to the question posited in the title?: with me, it's always green.
at June 25, 2009 1 comment:

How'd You Say She Was Built? 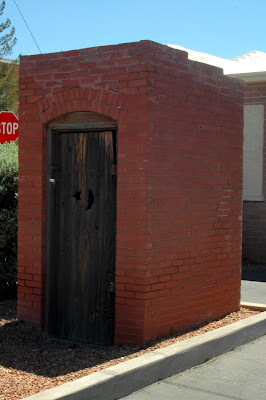 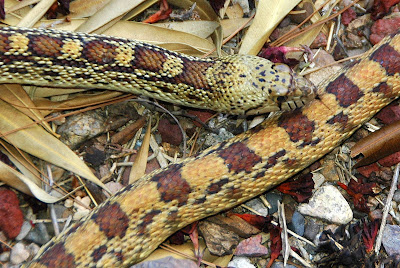 Was grilling the other night, caught movement in my periphery below the deck. Here was this yard-long Bull Snake (aka Gopher Snake). According to one website, they're their own worst enemy because they do a very passable imitation of the Western Diamondback Rattlesnake when threatened.... and end up dead. This was the second one we've seen, so I knew it was just cruising for food. It disappeard under the house looking for mice or packrats. What the Border Pest Control-placed bait stations don't kill, this reptile will. Note: it's only one snake, making a U-turn, not two.
So far (fingers crossed) no rattlers in the yard.
at June 25, 2009 1 comment:

Where the hell you all been?
Oh.. I see by my visit counter you've been here all along, while I've been... what the hell have I been doing?
Well, part of the time since the last post.... what??!? over a month ago? Whatever.. part of that time we were travelling. About that time we were leaving the Scottish Deerhound specialty in Missouri, and were heading to Michigan for the Rhodesian Ridgeback specialty. Then we headed south to Lexington, KY for the Saluki specialty... (and I should note here, that had I been blogging during those events, those of you who thought the blog posts were getting too negative -Joe- would have noticed a definite uptick on attitude. Money changes everything).
We are now back home. And we're going to stay here for a long, long time. There's nothing on the schedule until the AKC National Lure Coursing Championship in December.
We've added a very cool high speed connection from Verizon.. a bitty, credit card sized "personal hot spot" device. We can both be online, without wires, at broadband speeds. Only drawback, is the 5GB limit each month, (or 2.5 for each of us). That precludes downloading long movies and such.. so not a big problem.
With all this new technology, the blog should begin to pick up steam again.. just like the old days. And I'm referring to the old days "BFB" (Before FaceBook). Yes, Facebook is my scapegoat. I knew when I joined up it was a big time sink. I just didn't realize how much of a day could be wasted on it. But, in its defense, it's just so much easier to share thoughts, links, photos, and all the other things that would normally have been posted here. So, I'm not going to leave Facebook.. and if you're interested in what I'm posting there, you should send me a friend request. If I know who you are, I'll let you in.
Meanwhile, I'll be planning on spending more time on the blog. Lots went on here while we were gone, so there will be pictures to post. Summer's started and the snakes and lizards and tarantulas have hit the yard. I would expect to post more photos than writing for the near term.
So there you have it. Tell your friends. Oh! And tell your friends that Margaret and I both have new - local - phone numbers. Now that we're not wandering from sea to shining sea, we thought it would be a good idea to establish a local presence, and ditch the Jackson and Milwaukee area codes and numbers. If you need the new numbers, you can find them at the website.
Look for the first pictures later today or tomorrow.
at June 25, 2009 No comments: