Yup. This is Depressing. 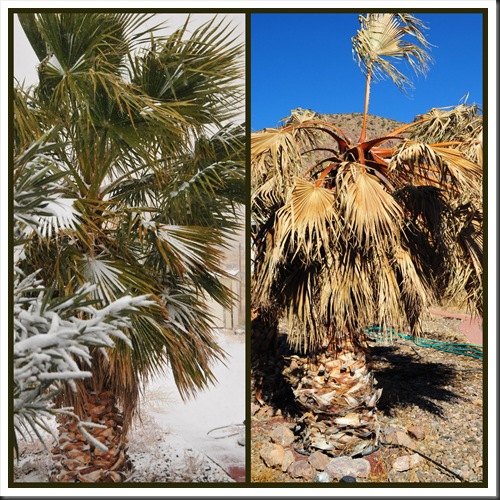 A mere 6 weeks separate these two images.  The palms all over town, and in Las Cruces look the same.  This makes me sad.

Email ThisBlogThis!Share to TwitterShare to FacebookShare to Pinterest
Labels: Around the yard, Images, Nature, Weather 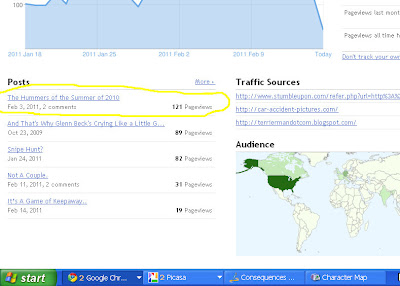 Past 30 day count shows the hummingbird film is beating the former most viewed post here.. Dipshit Glenn Beck. I think I owe Soso Whaley one.
Posted by Daniel Gauss at 10:11 PM No comments:

Consequences of a Changing Climate 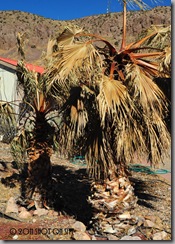 Just a few weeks ago, these California Fan Palms in our backyard were snow covered, and still green.  Then the deep freeze hit.  More than 90 straight hours below freezing, with overnight lows around 0°F, and wind chills 15 - 20° below that.  Daytime highs struggled to make the 20’s.  A few days after the cold broke, I noticed that all the fronds had turned brittle and brown.  Then we had a day with brutal winds, and the crown of the tree just went over in a right angle to the trunk.  We don’t know if these palms are dead.  The experts say don’t trim or chop till Spring.. see if the plant can replenish itself from the roots.

We live in an area where the average January and February high temperatures are in the 40’s and 50’s, and overnight we might hit 20° on a bad night.  The plants aren’t used to what we have and neither are the houses.  We lost our water for 48 hours, and have some not-quite-essential pipes to replace under the house.. (the pipe supplying the outside faucets, and also the refrigerator ice maker-  the horror! No cracked ice for Margaritas!).  There’s also a tiny leak in the well house, although I’m not sure it’s related to the cold.  It took me several days to realize the consistently crowded parking lot at the hardware store wasn’t because they were having a giant clearance sale.  They were selling PVC pipe. Thousands and thousands of feet of PVC pipe.

Besides our palms, our prickly pear cactus are drooping, and even the acacia, and Mexican elder look sickly.  The Ocotillo always looks dead in the winter, so we’ll just have to wait and see on that one.  The only thing that looks unscathed is the all the goddamn cholla!

Most disturbing of all, is the plight of the Ponderosa pines.  At Christmas, they were green and thriving, lit up with our holiday lights.  Now 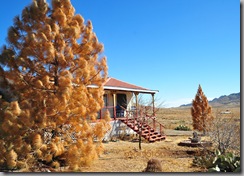 they are sad and brown.  I can’t believe that the cold did this.  They’re mountain trees fer chrissakes!  I think they’ve fallen victim to the lack of moisture.  We haven’t had any appreciable precipitation since Summer.  We had a blizzard at the end of January, but because it was so cold and dry, the snow seemed more to evaporate than melt.  There was no mud.
I’ve been watering the pines and the fig tree, (which also looks in a bad way), but so far they remain golden brown, and stand out on our hill like a beacon.

Rain is in the forecast for Sunday.  It may, and it may not, depending on the wildly varied forecasts from the different online weather services.  These plants have been in the yard since the house was placed here in 1997.  I’d hate to have to start over.
Posted by Daniel Gauss at 9:10 PM 1 comment:

Email ThisBlogThis!Share to TwitterShare to FacebookShare to Pinterest
Labels: Around the yard, Images, Nature, Planting and Gardening, Weather

It’s A Game of Keepaway.. 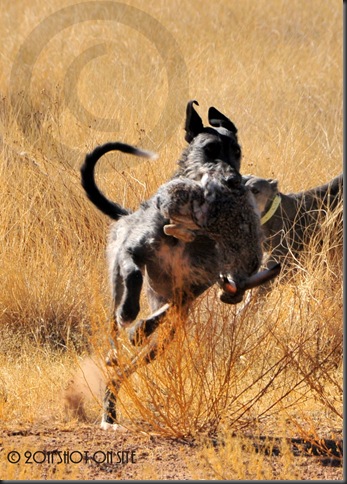 Generally, a hound packing a hare back will walk, or at the most, trot. Not Willow. With the rest of the dogs hot on her trail, she came rushing back to show me the prize. With enthusiasm.
Posted by Daniel Gauss at 9:01 AM No comments: 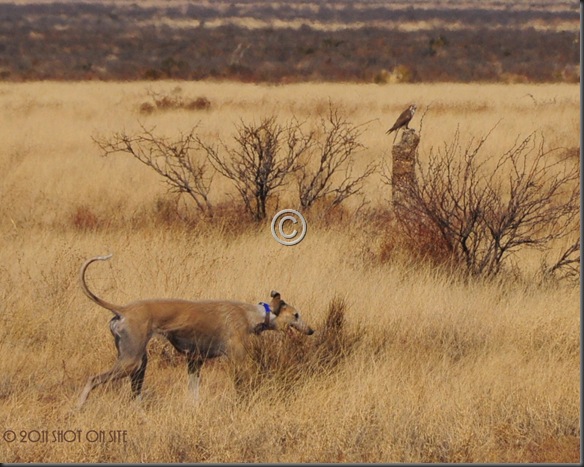 Ever wonder what would happen if your dog jumped a jackrabbit when a large bird of prey was in proximity?   Would the bird, (in this case a handsome Prairie Falcon) join in the pursuit?  Would it steal the prey?  I wondered the same thing!
I’ll keep on wondering, too, because the falcon  flew off just a second after I snapped this image, and a good half hour before we finally jumped a hare.   Ah, what might have been.
Posted by Daniel Gauss at 5:46 PM 2 comments:

Darwin Day Is Upon Us..

One of the saddest things to have happened in the last couple of months was the decision by Pat Burns to 95% walk away from his Terrierman's Daily Dose blog. It's been a must read for me since being pointed there several years ago from Steve Bodio's Querencia blog.

Fortunately, Patrick's 5% is generally more useful than my 100% here, so I look forward to his too few and far between posts. Yesterday he posted this very valuable reminder that this coming Saturday, February 12 is Darwin Day! He also included this wonderfully subversive little video:


Evolution Made Us All from Ben Hillman on Vimeo.

This helps to raise my spirits some, which had been soundly dampened yesterday, by this deeply disturbing bit of news from NPR.

Chin up fellow secular humanists! All is not lost. Celebrate Darwin Day!
And hurry back, Mr. Burns.
Posted by Daniel Gauss at 5:31 PM No comments:

..unless you were watching Armed Forces Network in Afghanistan, or from a carrier in the Gulf..

Some find the fact that our servicemen don't get to see the real commercials on AFN as slightly un-American. I think I agree, but if all of the PSA's were this well done, they'll be all right.
Posted by Daniel Gauss at 11:15 AM No comments:

Just ignore, for a moment, the fact that Chrysler is now owned by FIAT (Fix It Again, Tony), and the US taxpayers... better yet, just imagine a Ford Focus ST, or Fusion Hybrid in the place of the Chrysler 200.. Or, just forget about the car completely, because the car's not what makes this, hands down, the best ad from Superbowl XLV:

Posted by Daniel Gauss at 10:40 PM No comments:

Start The Revolution Without Me.

I find it interesting that in the midst of a revolution, someone in Cairo still finds the time to surf to this blog to look at the Victoria's Secret image. 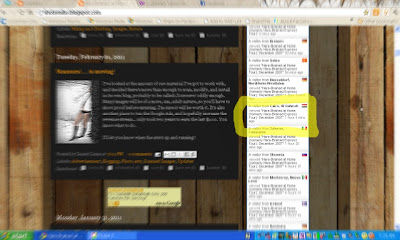 Posted by Daniel Gauss at 7:47 AM No comments: 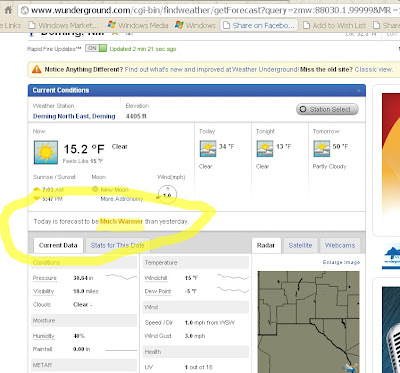 For the last two days, we've had temperatures well below normal. For example, the normal high for this time of year is 62°F. We struggled to come close to 20°F. Probably 40% of the state is without water, us included. Many are without natural gas, and with power companies effecting rolling blackouts, some have been without power. The winds from the North on Wednesday and Thursday were strong enough to turn a trace of snow into a blinding
blizzard!

In our area, particularly, the homes are not suited to cold this extreme. We've been without water since Wednesday night, probably because the water line from the well building to the house is not buried deep enough. Fortunately, our well building is well insulated, so there was running water from the tap there.. we were able to fill some 5 gallon buckets to at least be able to flush the toilets. We've been spoiled here, and had forgotten the rules about opening the taps to prevent freezing.. besides, who could have imagined that we would break the record for low temps by a whopping 20 degrees?!

The dishwasher is full. The kitchen counters are full of more dirty dishes. Our bodies are.. well, enough said about that. We could use showers.

I awoke at 6:15 this morning to the sound very much like a dog getting ready to empty its stomach. I was afraid the drains were about to back up. In reality, it was the faucet in the bathtub, trying mightily to produce water! It would produce only a trickle, but a trickle was more than we've had for more than 50 hours. To compound the good news, the same was happening in the second bathtub. Not a drop from any of the sink faucets yet, but now that appears only a matter of time.

The forecast for the next 10 days is for highs in the 60's. That sounds a whole lot like normal to me, and the last two days will be but an ugly memory. Next Winter we'll know better, and I want a wood burner in the house!
Posted by Daniel Gauss at 9:28 AM No comments:

On an eye-bleedingly, bone-chillingly cold day in the middle of Winter, where the last two days set record low temperatures, and tonight promises to do likewise, I was inspired to finally put together a film from last Summer. I was probably complaining about the flies and the heat then.

I may have mentioned - more than once - that we had an unusually large numbers of hummingbirds around the yard last season. May this make you feel warm. (Not doing much for me so far...)
Posted by Daniel Gauss at 1:02 PM 2 comments:

Email ThisBlogThis!Share to TwitterShare to FacebookShare to Pinterest
Labels: Around the yard, Humor, Videos, Weather, Wildlife;

Echoes Of An Ancient Forest. 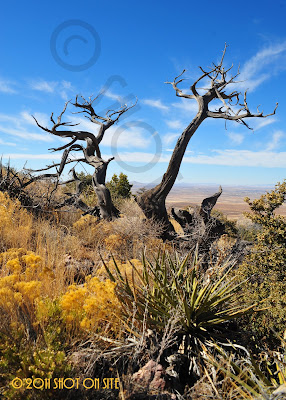 A fine example of ancient Juniper at the top of the Little Floridas. One of many.
Posted by Daniel Gauss at 10:21 PM No comments:

I've looked at the amount of raw material I've got to work with, and decided there's more than enough to scan, modify, and install in its own blog, probably to be called: Scanners! oddly enough. Many images will be of a more, um, adult nature, so you'll have to show proof before entering. I'm sure it will be worth it. It's also another place to run the Google Ads, and hopefully increase the revenue stream.. only took two years to earn the last $100. You know what to do.

I'll let you know when the site's up and running!
Posted by Daniel Gauss at 7:01 PM No comments: