S'cuse Me While I Obsess.. 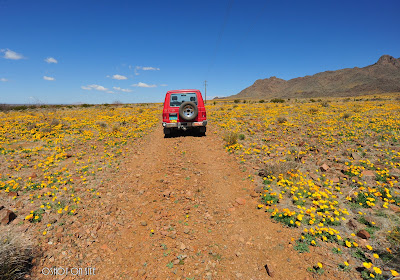 "Follow the Yellow Brick Road...."  as far as the eye can see.  In this picture are the two things that are floating my boat these days.. (figuratively, of course, I am in a desert)..  These billions and billions of golden beauties, and the "Red Mr. Bitchy".. (yes, it now has a name).  Spotted some more car parts in an arroyo today.  Aboard Red Mr. Bitchy all is still intact. 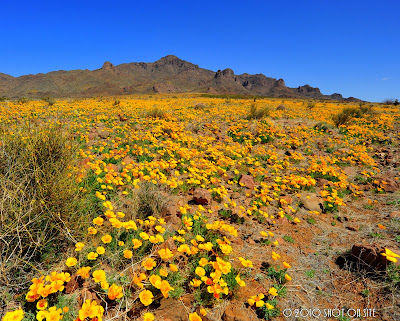 In a few weeks when, either, the novelty wears off (unlikely), or the poppies vanish for an unknown number of seasons again, I'll get back to normal.  I foresee a slide show in your futures.
Posted by Daniel Gauss at 8:44 PM No comments:

Yesterday, we posted a number of images of the spectacular, and interesting flora and fauna of Southwest New Mexico.  These images, taken during the same ramble around the area....  don't quite fall into that category... 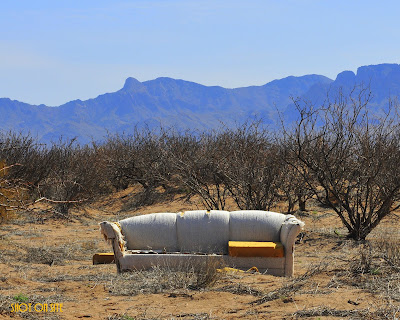 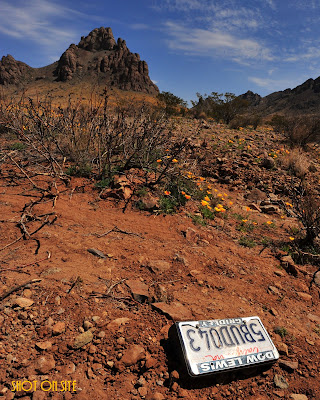 Perhaps you shouldn't be out on the trails in your Crown Vic..
(bonus if this plate was ripped off of your vehicle trying to cross the arroyo)
Posted by Daniel Gauss at 9:55 PM No comments:

A Day In Nature Pictures. 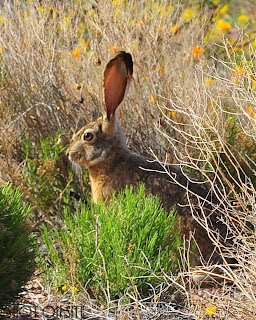 Why?  Because, that's just the kind of day it was.  It began right out the gate this morning, (literally), with this young fellow posing for a portrait.
After an uneventful trip to the bank, I decided to find a couple
Geocaches out in the flats; a drive of about 10 miles.  Not long after turning off the main highway, I interrupted this immature
Harlan's Red Tail Hawk, who was opportunistically gobbling up a road-killed jackrabbit.  Sorry dude. 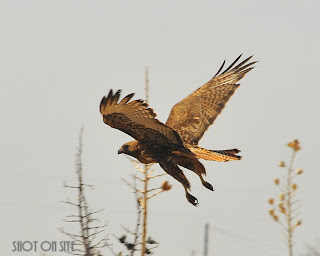 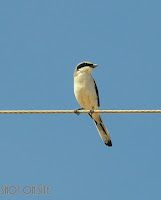 At the second cache, I felt I was being serenaded, looked up on the wire and saw this non-raptor meat eater.. a Loggerhead Shrike.
I enjoyed the song for a while, then headed back north for another hide.  That's when I whizzed past a Coopers Hawk relaxing on a fence post.  I made a quick U-turn, and stuck the camera out of the window and snapped off a shot just as it was tensing to make it's escape from my intrusive scrutiny.. 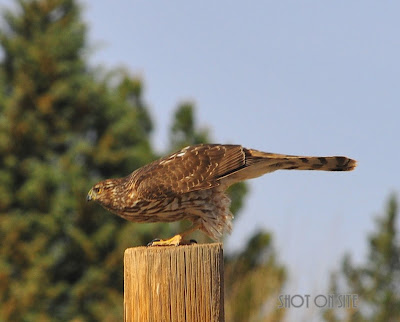 At that point, I gave up on the caching, because I needed to get up close to something very spectacular that was going on on the west foothills of the Florida Mountains.  I had to get here: 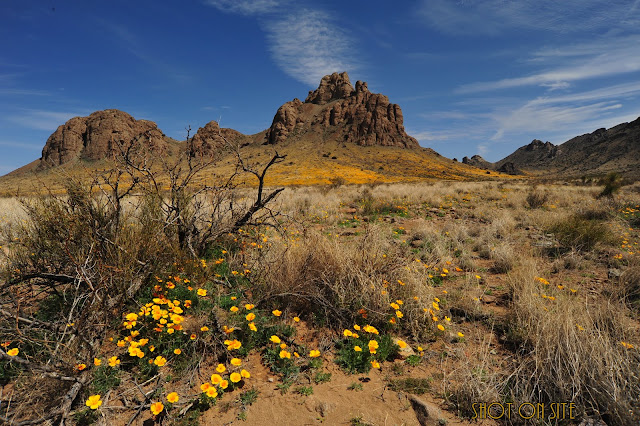 Yes, the Mexican Poppies are blooming great guns.  It looks impressive from here.  Up close it looks completely insane! 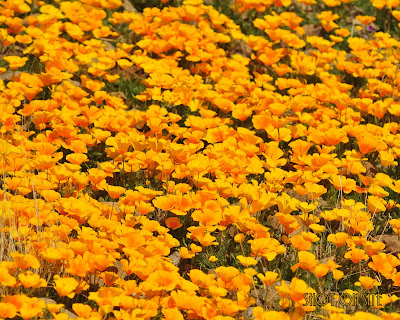 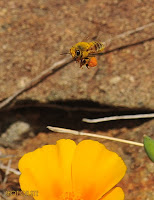 And if that impresses us as humans, imagine the effect it has on these guys:
Posted by Daniel Gauss at 11:38 PM 2 comments:

We've had a few opportunities to try out the Mitsubishi on the hundreds of miles of jeep trails in our little corner of New Mexico. I told Margaret to bring the video camera, but we were stuck with the cell phone. Don't get seasick!
Some road, eh? Well, in the strictest sense of the word. We'll be spending more and more time driving..... slooooow.
Posted by Daniel Gauss at 8:28 PM No comments: 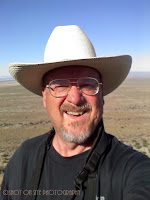 I'm Indiana Gauss.
I'm a famed dashing and handsome blog-cheologist.  I seem to have stumbled upon this ancient and neglected blog.  It appears to have been vacated by some early race of idealistic, energetic blogger.  I've seen this before.  You would think that these indigenous writers would have vanished mysteriously from the face of the earth, but that's not so.  In true nomadic fashion, they've become part of the diaspora to Facebook, Twitter, LinkedIn, and other so-called "social networking" sights.  Their laziness had gotten the better of them, and they no longer wanted to make the effort to toil at their thankless blogging tasks.
Fortunately, the final history of bloggers in general, and this blog in particular is far from being written.  Enough empirical evidence exists to predict that this blogging malaise is reversible, and that this blog will become a hive of literary activity very soon, (in blog-cheologic time, that is).
In fact, I can pretty fairly predict that soon you will here be reading about such diverse topics as:
And probably a whole lot more.  You would be wise to monitor this location closely.  That is my professional opinion.  Now, I must be off to kill some Nazis and eat monkey brains.
Posted by Daniel Gauss at 7:08 PM 3 comments: