When we moved in in the Winter of 2009, we heard stories about the poppy blooms that would cover the foothills with blankets of gold.  We were told we'd be lucky to see them once or twice in our lifetimes here... they were "7 year blooms".

Well guess what.  We had a spectacular poppy (and other wildflowers) season in 2010.  And it looks like it's going to happen again this Spring after yet another fairly wet Winter.

Our yard is beginning to fill already.. the above image was just at the end of the driveway between the house and the Hare-Brained Express.  I'm also starting to see bands of gold in the small gullies of the Little Florida mountain foothills.  More to come... 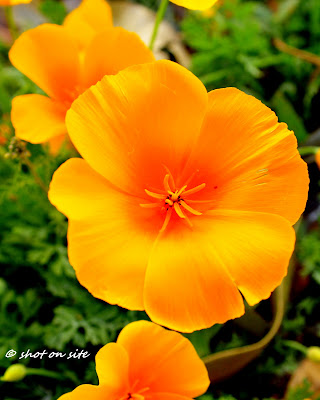 Email ThisBlogThis!Share to TwitterShare to FacebookShare to Pinterest
Labels: Around the yard, Nature, Wildflowers