The drought continues.  According to the weather services, the humidity late yesterday afternoon was 1%.  The dew point?  A ridiculous -20°F.  That’s right.  Twenty freaking degrees below zero! 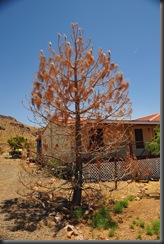 And since the ambient temperature was 110° higher than that, it wasn’t likely that we would squeeze any moisture out of the air.

Somehow, despite the lack of any measurable precipitation since the end of last year, (and that was a single snow fall, so really, the dry spell goes all the way back to Summer), things are turning green.  It’s most noticeable when driving  home from town.  Huge green swaths of creosote bush surround the base of the Florida Mountains.  In the yard, the mesquite brush seems to be the most drought-hardy of all the plants.  Dammit.  Of all the flora I wish dead, the mesquite is at the top of the list!

I’ve been watering (and no, so far there’s no shortage of water in our aquifer, knock wood) the peach tree and the pecan tree, and the fruit is looking good.

The pines, at least from a distance, look as dead as the pronouncement from a friend who knows things about trees and plants.  But if you look closely, the trees have a secret.  When stressed, as they are in extreme drought conditions, they seem to go into a kind of survival mode.  First, they dropped almost two-thirds of their needles.  New needle clusters normally would be sprouting from 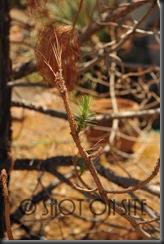 the ends of the branches , but even with the constant, 24/7 drip I’ve got going to our two pines, the tree’s not sending water to the extremities.   But it is using the water!   A few weeks ago, I noticed these little green needle clusters start showing up on the branches closer to the ground.  As time passed more have begun to sprout, and on higher branches, too.

What seems to be happening, and I couldn’t find quite what I was looking for on Google, is the tree has gone dormant at the top, and the extremities, but it is keeping itself alive by pushing out enough green to keep transpiration happening.

This is even more evident on one of the trees in the back yard.  Up until a couple weeks ago, I was certain it was dead.  While other trees in the yard were full of broad, green leaves, nothing was happening with this tree (which we’ve never identified, but we know the hummingbirds like to roost in it because it’s the closest tree to the feeder).  The ends of the branches were brittle dry.  No sign of life.
Then a strange thing happened.  Leaves began to sprout from the trunk; and from the thick areas of the branches closest to the trunk.  It looks odd, but this is another tree that’s killed off part of itself, to save itself.  Kind of like that kid in 127 Hours.

One of the climate models looking 6 months to a year out, shows a powerful el Niño is a possibility.  That , if it happens, will most certainly break the drought.  Will the trees then “wake up”, and go back to the way they were before the drought and the powerful February freeze?  Don’t know.  We’ll just have to wait and see, but I’m happy they seemed to have figured out a way to hang in there and wait with us. 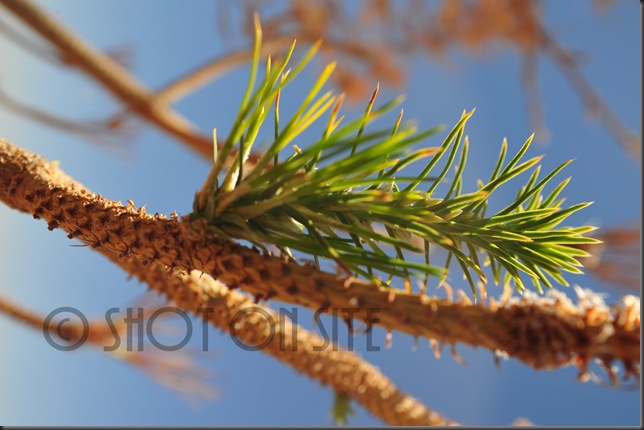 Email ThisBlogThis!Share to TwitterShare to FacebookShare to Pinterest
Labels: Around the yard, Follow up, Images, Nature, Planting and Gardening, Weather